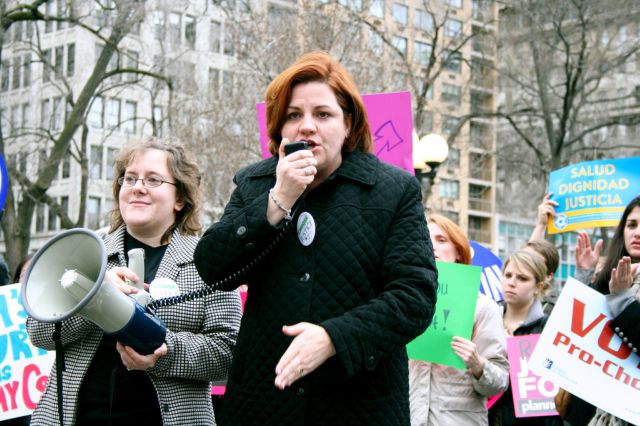 City Council Speaker Christine Quinn is currently holding a press conference declaring her support for the mayor's proposal to extend term limits. Her announcement ends Quinn's remaining mum on her official stance since Mayor Bloomberg announced his intentions to maneuver for a third term bid almost two weeks ago. It also reverses the vow she made last year to uphold the two voter referendums in support of term limits.

Quinn had originally intended to make a run for mayor herself next year, but backed out of the race when her close political ally Bloomberg finally threw his hat in the ring after months of speculation. The mayor's decision to run gave Quinn an easy out of a campaign that looked like it would be an uphill battle after what has been a scandalous year for the Speaker.

Opponents to the mayor's plan are not surprised at Quinn backing it. To them this is just the inevitable next step in what they see as a series of handshake deals and back room agreements, including Ronald Lauder dropping his opposition of extensions and the mayor secretly going to the heads of the Big Three city papers looking for their support. "It's been carefully choreographed from the get-go," said Councilman John Liu.

It appears to be a banner day for Bloomberg's plan to stick around New York as mayor for another four years. In today's Post, Ed Koch says he hopes that Bloomberg's re-election will no longer make him "the last of the three term mayors." He also lays out why he has no problem with the term limit laws being amended without a voter referendum saying, "It makes sense on paper, but it would be no more representative of the public than allowing the council to decide the issue itself."