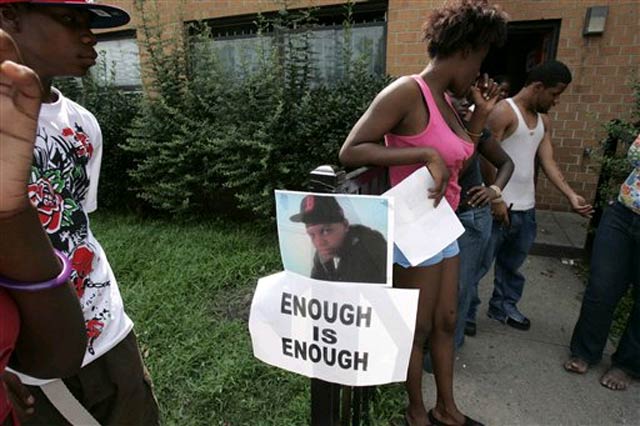 On Thursday morning, 15-year-old Bukhari Washington was killed in his bedroom when a bullet from a semiautomatic rifle entered through the floor of his bedroom in Newark, NJ. He had been sleeping, and it turned out his downstairs neighbor, 19-year-old Terrance Perry, accidentally fired the rifle when "fiddling" around with it.

In a city too accustomed to violence and deaths of innocent youths, Bukhari's death has hit hard. The NY Times wrote, "By the time Bukhari was 14, his father had died, one brother had gone to jail and another had been admitted to a psychiatric hospital. Bukhari and his mother lived for a time in a homeless shelter. He had attended 13 different schools by the eighth grade." But he was able to get a full scholarship to a Catholic school and interned at a nursing home for people with HIV and AIDS. He gave people at school and the home hugs, "Bukhari said he gave them out because he rarely received them at home."

As for Perry, the 19-year-old's father believes his son had the rifle after enduring too many taunts, but admitted to the Star-Ledger, "Why he felt he needed a rifle, something that big, I don't know." The Newark police doubt it was for protection, given that the 40-inch rifle is something the Russian army used to use. Newark Police Director Gerry McCarthy said the assault weapons ban needs to be reinstated, "This isn't just Newark's problem. This is the country's problem, and this is preventable."

Perry, who graduated from high school in 2007 and worked as an orderly at Newark Beth Israel Medical Center, is described as an "often-bullied, hard-working teenager who had taken up boxing after he was beaten up in high school" to the Times. He is being held on $300,000 bail, facing charges of aggravated manslaughter and illegal possession of a gun.

#assault weapon
#fatal shooting
#newark
#shooting
#tragedy
Do you know the scoop? Comment below or Send us a Tip