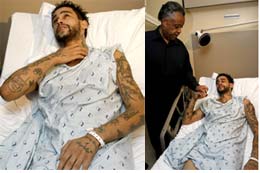 The 24-year-old who says five police officers sodomized him with a police walkie-talkie last week spoke to the Daily News from his hospital bed. Michael Mineo, who was re-hospitalized, said, "The cops did this to me... I'm in so much pain... I've got pus coming out of me, man. I need help!" And the NY Post has photographs of Mineo being visited by the Reverend Al Sharpton, who called for an investigation into the matter and compared it to the Abner Louima incident.

Mineo says that on October 15 around 12:30 p.m., a group of cops stopped him as he was smoking a joint. He ran into the Prospect Park (at Flatbush) subway station. He ran into the station, where the cops stopped him by the turnstile. Mineo says he was held down, punched, and kicked--and at one point, his pants were pulled down and one officer inserted a walkie talkie antenna into his rectum.

Mineo's tale was discredited by two witnesses, the police sources said.
Several civilian witnesses watched the officers cuffing Mineo, who was shouting "Don't Taser me!" and "Don't shove a walkie up my a--!" the police sources said.
Witness told investigators that the cops did not have Tasers, nor did they see any abuse. However, one did see Mineo's pants down exposing his buttocks.

The NYPD has not, however, interviewed the accused officers or put them on modified duty, which upsets Mineo's lawyers. The NY Times reports his lawyers say "they had interviewed four witnesses who corroborate Mr. Mineo’s version of events and that police have not yet requested a copy of the hospital report.."

The Brooklyn DA's office has launched an investigation, setting up a hotline for witnesses (718-250-2759). Mineo has a criminal record, including arrests for marijuana possession and assault. But his lawyers and friends stand by him; his roommate said of the tattoo artist, "When you look at him, you’re going to think he’s a bad guy, but he just wants love.”