Questions About Fatal Police Shooting in the Bronx 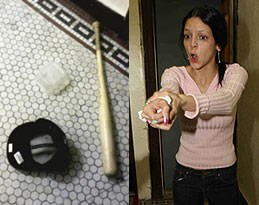 While the fatal police shooting of a bat-wielding Bronx man was initially characterized as a domestic dispute, his family says Alex Figueroa was defending his 18-year-old stepdaughter's honor.

The Post reports that Figueroa, his wife, the stepdaughter and a friend went "to a fourth-floor apartment to confront two men who had made a comment about his stepdaughter's legs"; Figueroa was carrying a bat while the friend was holding a "wooden closet pole." When the argument escalated to involve 10 people, a neighbor called, telling the police about the fight and saying there was a gun.

Based on that information, police were were on "heightened alert"; according to the NY Times, at least one officer, the first to reach the scene, wore a bullet-resistant vest and had his weapon drawn." But the Daily News reports the 911 caller later admitted she lied about the gun "to get them to respond faster."

The first police officer on the scene, per the News, "took a step backward, and then fired once"; the 30-year-old cop claimed Figueroa "came at me with a bat." But Figueroa's wife Sandy Rodriguez said while the officer said "Don't move" once, he opened fire; she said, "Not even five seconds. 'Don't move' and then bang." Another witness told the Times that Figueroa initially had his back to the police and had turned when they said "Freeze": "They shot him when he turned around. I don’t think they gave him a chance. Everything was going so fast.” Still, some other witnesses told the police that they heard the police tell Figueroa to drop the bat and he moved towards them while lifting the bat.

Figueroa, who was shot in the chest, died at the hospital. The NYPD is investigating whether the shooting falls within departmental guidelines; the cop who fired has been placed on modified duty. Police spokesman Paul Browne added, "It is not helpful for the public to knowingly provide police with wrong information."