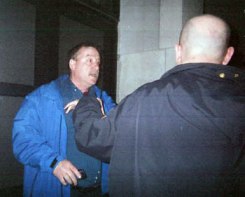 Police from the 19th Precinct were called to the Y because two individuals were being disruptive during a talk with First Lady Laura Bush and her daughter Jenna. One of the Y's policies is "the right to [exclude]...anyone who disrupts a program or anyone who fails to abide by the institution's rules and practices."

However, Talis and at least one witness say Talis was the one being assaulted, by John Lovetro, the father of the wheelchair-bound teen (here's a video of Talis explaining his side). The witness, Dianne Lipson, took this photograph of Lovetro apparently being restrained. Lovetro had told the Post last week, “He began yelling about Iraq and Iran at Jenna Bush. She was waving at the crowd. I told the guy, ‘What are you doing? Shut up. This is about a child and books.'"

We are Change (described as a "citizens based grassroots peace and social justice movement working to reveal the truth behind the events of September 11th as well as the lies of the government and corporate elite who remain suspect in this crime" on its website) is raising money for Talis's defense fund.

#92nd street Y
#bush protest
#protest
Do you know the scoop? Comment below or Send us a Tip