Questions About a September 11 Survivor's Story 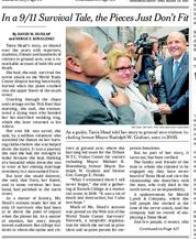 The NY Times has a Section A, Page 1 article about a woman whose identity since the WTC attacks has been defined as a September 11 survivor but her September 11 story doesn't quite add up. Tania Head said she had been on the 78th floor of the north tower, still bearing some burns, and gave tours at the Tribute 9/11 Visitor Center. She also acted as president of the Survivors’ Network and said her fiance died in the south tower. But her supposed fiance's family and roommate never heard of her, no hospital has a record of treating her, and she was not employed by Merrill Lynch, the company Head said she was working for at the time.

With the 6th anniversary of the September 11 attacks, the NY Times says they were trying to get in touch with her, especially since she's mentioned her touching story in other outlets (for instance, the Daily News' Michael Daly wrote about her last year and she's mentioned in a 2004 Time magazine article that's on the Giuliani and Partners website) and because her "account made her one of only 19 survivors who had been at or above the point of impact when the planes hit." But Head "canceled three scheduled interviews, citing her privacy and emotional turmoil, and declined to provide details to corroborate her story."

During a telephone conversation on Tuesday, she would not explain her reticence, saying only that she had not filed any claims with the federal Victim Compensation Fund. “I have done nothing illegal,” Ms. Head said.

She has retained a lawyer, Stephanie Furgang Adwar, to represent her. Also on Tuesday, in response to a question about the accuracy of Ms. Head’s account, Ms. Adwar said in an e-mail message, “With regard to the veracity of my client’s story, neither my client, nor I, have any comment.”

The Times' investigation found that Head gave conflicting accounts of her reasons for being at the World Trade Center (she worked there, she was applying for an internship) and that there were no indications that a foundation she supposedly set up existed. The Survivors' Network and Tribute 9/11 Visitor Center cut off ties to her, after the Times' questions. And a Survivors' Network associate said that Head's story about her fiance changed three times: She knew her fiance's family well; her fiance was keeping their relationship a secret; and, finally, her fiance was a fantasy.

Many people seem to agree that she helped promote the cause of 9/11 survivors, earning no money and holding events in her home. But while she may not have done anything illegal, the article suggests Head may have deceived victims' families: The father of one man who Head said helped her told the Times, "She said she still had her burned clothing and was going to send us a piece of it on a plaque since it was one of the last things our son had touched. She explained that her clothes were on fire and that our son took a jacket and put out the flames. She told us that she said, ‘Don’t leave me,’ and he replied, ‘I won’t. Don’t worry. I’ll get you down.’”

In February, the NY Times revealed that a deceased man being promoted as a symbol of 9/11 responders afflicted with health issues actually spent much less time at Ground Zero than previously reported.