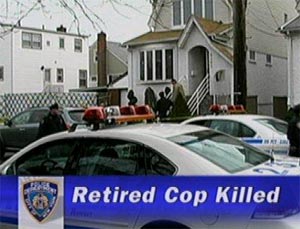 A UPS delivery man saw the body of a retired police sergeant, shot in the torso, on the floor of a Howard Beach home and called 911. The police arrested the sergeant's wife and charged her with murder.

It appears Raymond Sheehan, who retired from the NYPD in 2002 and worked for UBS security, was shot around 1PM. Police say his wife Barbara Sheehan, a secretary at a Brooklyn public school, used one of his guns to shoot him in the back while he shaved. She was taken to Jamaica Hospital - she had a "fresh facial injury" when police arrived - but left before being treated.

There are conflicting suggestions about whether the couple, who have two college-aged children, had a history of domestic violence. Some neighbors indicated domestic disturbances were common from the Sheehan home (Daily News), while others said they never heard any fights (NY Times). Per WABC, "One neighbor started to clap as [Barbara Sheehan] was paraded by before a woman made him stop" and another neighbor told the Post, "There's a reason she did this. He was free with his hands and she probably couldn't take it."

Barbara Sheehan's father told the News, "There were all these times when she would come back here with a black eye or a cut on the head. She would cover for him and say she fell...All the women who were being abused or have been abused should speak up before they get to this point where it's a disaster." And News had this quote from a member of Raymond Sheehan's family: "We figured it would be the other way around. Ray was the one on the edge. The job did it to him."