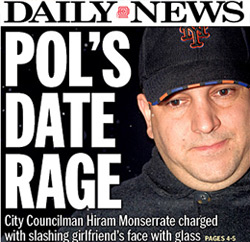 State Senator-elect Hiram Monserrate is facing charges of second-degree assault and fourth-degree criminal possession of a weapon in connection with a domestic violence incident after being arrested early yesterday morning for allegedly assaulting his girlfriend, Karla Giraldo. Here's some of the Queens DA's office statement:

According to the criminal complaint, during a verbal dispute at Mr. Monserrate’s residence at approximately 1:00 a.m. this morning, the defendant picked up a glass and broke it in his hand.

Mr. Monserrate then allegedly hit Ms. Giraldo, 30, with the broken glass, causing her to sustain a black eye and lacerations above her left eye, which required approximately twenty stitches to close.

Mr. Monserrate, who is presently a member of the New York City Council, was taken into custody this morning by police officers assigned to the New York City Police Department’s 105th Precinct after taking Ms. Giraldo to Long Island Jewish Medical Center for treatment of her injuries.

The pair had been scene hours earlier at a Queens Democratic party holiday event at the Queens Museum of ARt. Monserrate's lawyer said in court that the slashing was not intentional, "He tripped and hit her face with the glass. It was an accident." Queens prosecutor Scott Kessler said the pair had gotten into a "loud and boisterous argument" about an "object found in her purse." At the hospital, Giraldo originally explained Monserrate stabbed her in the face but then changed her story, but Kessler said, "She doesn't want him to go to jail. She doesn't want protection."

Still, the judge ordered that Monserrate stay at least 100 yards from Giraldo and cannot contact her. Monserrate pleaded not guilty and was released on $2,500 bail. The Daily News points out that in 1999, Monserrate, a former police officer, filed for disability pension by claiming, "I suffer with adjustment disorder with mixed anxiety and depression, and posttraumatic stress disorder."

Other city lawmakers are shocked and upset by the allegations. City Council Speaker Christine Quinn said the incident was "deeply, deeply troubling Of course, they're allegations. Council member Monserrate, just like any individual in the city or anywhere else, is innocent until proven guilty." Mayor Bloomberg didn't speak specifically about the charges, but did say, "one of the more serious things, crimes, acts of behavior that shouldn't take place is domestic violence.... We take domestic violence very seriously." So did Monserrate: In 2006, he "secured $100,000 to fund a program to to give women the resources they need to protect themselves from domestic violence."

#City Council
#domestic violence
#hiram monserrate
#Karla Giraldo
#queens
#state senate
Do you know the scoop? Comment below or Send us a Tip