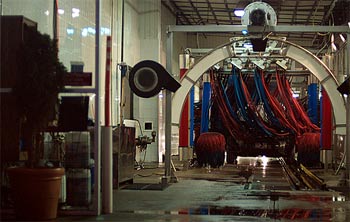 A Queens resident was arrested after driving his car into a car wash controller repeatedly at the Mr. Hand Car wash in Elmont, Long Island.

Assi Touti had driven his Chevrolet Silverado through the car wash once, but complained it wasn't clean enough, so workers offered him another wash for free. But, according to the police report, "Touti reportedly became agitated at having to wait in line longer and for a second time, and intentionally drove his Silverado truck into the car wash's computer control, repeatedly, trapping three employees between that machinery and a fence."

The controller unit is now crumpled and an employee told WCBS 2, "He ran it over three or four times over here. Spinning his wheels. Completely irate." Touti was charged with reckless endangerment and criminal mischief.

Photograph of a car wash in Brooklyn by JGNY on Flickr

#car wash
#car wash rage
#crime
#long island
#queens
Do you know the scoop? Comment below or Send us a Tip
A new Gothamist is coming! We’ve moved comments over to our beta site. Click here to join the conversation and get a preview of our new website.