It's got to be tough for the modern xenophobe to live comfortably in Queens—as one of the most racially diverse areas in the whole country, you're bound to see someone you hate every time you peer out your window. 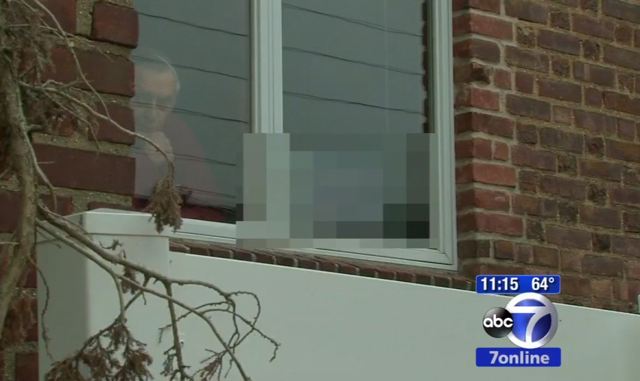 That's Sanjeev Aggurawal's theory, who along with his wife and 4-year-old son are forced to live next door to Jimmy and his public predilections. "He's upset because I'm Indian—some Indian guy moved in next door," he told ABC 7. "And that's it. That's the basic thing."

A reporter for ABC confronted Jimmy as he arrived back to his Fortress of Pornitude with some coffee. "My name is Jim Dolan, I'm a reporter with Channel 7," Jim Dolan begins. Jimmy looks worn out. "Can you tell me why you have those pictures up? Vile pictures. Why do you have them up there?" Dolan can not keep the loathing from seeping into his voice, which doesn't seem like a great tactic for trying to initiate an informative dialogue. Jimmy, somewhat hunched but looking smart in a tucked-in red shirt, doesn't seem to feel like shooting the shit.

"I'm drying them out. They got damp last night," he says matter-of-factly. Despite the blood-curdling nature of this response, Dolan perseveres. "They've been up there for some time, haven't they?" It seems there are a litany of other, more pressing questions to ask here, not the least of which is "Damp?" but Dolan deserves credit for hanging strong. Jimmy makes a strange, avian whistling sound into the microphone—is it...laughter?— and proceeds toward his porch. Dolan carries on, audibly enraged.

"You do that to offend your neighbors, is that what you do?" he asks, following Jimmy up the steps. "Get off my porch," Jimmy replies.

We are not made privy to what, exactly, is depicted in the windows of Jimmy's home, since those prudes at ABC insisted on blurring the images, describing them only as "so vile, so intentionally pornographic that just about anyone would be offended by their public display." What does that mean?!

The Aggurawals have called the police, and for a time, Jimmy will take the pictures down. But they always seem to come back.

"That's my artwork," he said as the front door snapped shut.