Police have arrested a Queens man who allegedly attacked a gay couple earlier this month in SoHo. 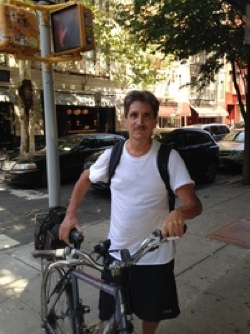 Thomas Clabough, 57, is awaiting arraignment on charges of assault as a hate crime and attempted assault as a hate crime for the August 2nd incident at the SOHO Newstand 1 at 86 Prince Street. According to the NYPD, Clabough entered the store at 2:30 p.m. to buy beer. Police say he shouted anti-gay statements, which led to a verbal dispute with two other customers. Clabough allegedly punched one Daniel Lennox-Choate, causing minor injuries to his mouth.

Lennox-Choate, and his husband Larry Lennox-Choate, wrote on Facebook, "It's hard to believe that in 2015 we would have to deal with anti-gay hate crimes in soho of all places but that's what happened today. First off- we're ok. Aside from one fat lip and a sore punching arm, we are fine. The guy who screamed anti-gay obscenities at us in a bodega before sucker-punching Danny? He left covered in his own blood with his tail between his legs after I handled the situation and tossed him in the street like the coward loser he is." He added, "The hate crimes division of the NYPD is on the case and we have full faith a positive outcome will follow."

The couple was the first male same-sex couple to be married at the chapel at West Point Academy, from which they both graduated.

First, we want to just say thank you to everyone- family, friends and strangers, for your concern and support. We feel the love and it is overwhelming in the best possible way. Our inboxes are overflowing with kind words of encouragement and disbelief of what happened.

We would like to encourage all of you who have felt moved enough to share a link or to send us a message to find some small way to contribute to the positive change we're all more than ready for when it comes to hate crimes and bullying. It doesn't even have to be of the LGBTQ variety. Unfortunately, hate comes in countless flavors and each of them stinks. Instead of hashing it out in the comments section of a news article, reach out to your political representatives and call for zero tolerance policies that aim to make good on the promise that all men (and women, of course) actually are created equal in this country.

Find an organization, either local or national, that takes up this cause and tries to stand up for every victim of this sort of heinous crime. Let's be the generation that says ENOUGH! There are hundreds of non-violent ways to send a clear message that this sort of behavior is intolerable and that we just won't take it any longer.