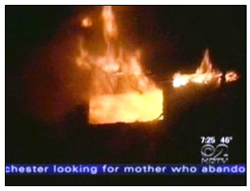 A fire that erupted in a two-family Rosedale home yesterday morning claimed the lives of a Corrections Department captain and her two sons. The Corrections Dept. union said that the victims were Captain Renee Chong and her two young sons.

The three-alarm fire broke out before 5AM. Neighbors tried to bang on Chongs' door, but the fire spread too quickly. One described the smoke as "toxic". Colleagues report that Chong was nearing 20 years of service with the Corrections Department and that the 40-year-old mother was planning on retiring soon. She was apparently found with her body over her 7- and 9-year-old sons'. Correction captains'union president Ronald Whitfield described Chong as "a very loving person... She cherished her children. That was the most important thing in her life.''

The cause of the fire appears to be the faulty motor in a Jacuzzi, which caught fire on the second floor. And residents are suggesting that the Fire Department's response time was too slow: It was 5 minutes 47 seconds, above the average of 4-5 minutes.

This weekend is Daylight Saving Time, a time the Fire Department suggests people change batteries in their smoke detectors. As we mentioned yesterday, the FDNY is distributing fresh batteries for free this week in "high risk" neighborhoods (where previous fires have occurred). Today the FDNY is in Staten Island; they will be in Brooklyn tomorrow, Manhattan on Friday and in the Bronx on Saturday. And here are more fire safety tips.

#As
#bronx
#brooklyn
#children
#corrections
#corrections department
#daylight saving time
#events
#fdny
#fire
#fire department
#house
#kids
#manhattan
#Neighborhoods
#News: NYC
#people
#safety
#staten island
#this week
Do you know the scoop? Comment below or Send us a Tip
A new Gothamist is coming! We’ve moved comments over to our beta site. Click here to join the conversation and get a preview of our new website.