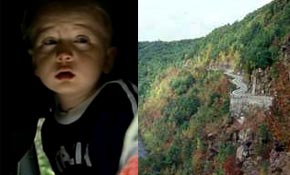 Three-year-old boy who disappeared from a Catskills campground on Saturday was found a day later. Daniel Niktalov, who lives in Forest Hills with his family but had been camping at the Swing Bridge Campground in Sullivan County, was found less than a mile away after "rescuers from three states" were involved with search efforts.

The boy, who only suffered a bump on his head and some dehydration, was found under a rock ledge. One rescuer told WABC 7, "I looked up underneath it and first, I thought it was a bear cub. When he looked at me, I thought, thank god he's ok...He smiled. And he came right to me."

Daniel, who the Daily News says was dressed warmly enough for his night in the woods ("Yankees winter hat, a black jacket, and gray pants"), himself explained, "I got lost." And his family was beyond relieved--his mother said, "I feel happy. I thank God that he's safe."