The city is trying to strip Queens Boulevard of the unflattering sobriquet "Boulevard of Death" and rebrand it the Boulevard of LIFE with a dramatic $100 million overhaul, starting between Roosevelt Avenue and 73rd Street. The redesign adds separated bike lanes and pedestrian paths along the medians separating the main road from the service roads on either side, narrowing the service roads to one car lane for much of their length. It also adds stop signs, pedestrian islands, sidewalk bulbs, and crosswalks along the chaotic street, and seeks to cut down on speeding in the run-up to Brooklyn-Queens Expressway entrances.

"Work has begun to turn Queens Boulevard into a 'Boulevard of Life'—literally remaking this street, rewriting its future, making it safe for all," Mayor de Blasio said at a press conference today.

A look at the basic design for much of the stretch of Queens Boulevard between Roosevelt Avenue and 73rd Street. (Department of Transportation) 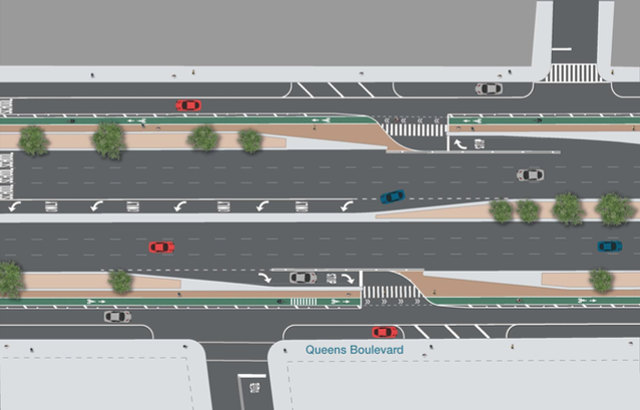 Instead of being able to slip from the main road onto the service road without slowing, drivers will have to stop. (Department of Transportation)

For a full rundown of the plan, check out this (warning: PDF) Department of Transportation presentation. 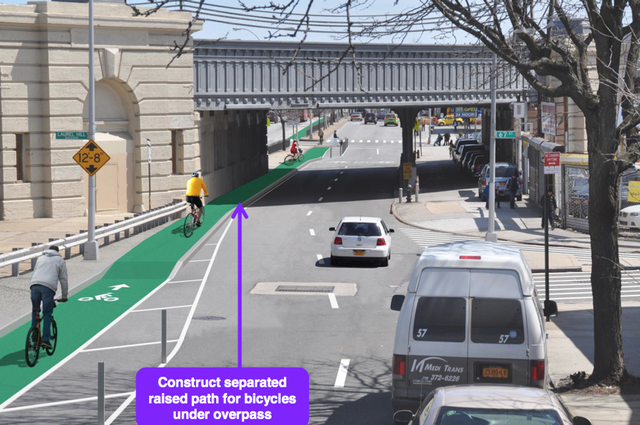 Get a load of this whimsical raised bike track at 67th Street. (Department of Transportation)

Construction of the next section, between 73rd Street and Eliot Avenue, is supposed to begin next year. The redesign will eventually stretch all the way to Union Turnpike when all is said and done. One hundred eight-five people have died in crashes on Queens Boulevard since 1990, according to the city. The project is one of four Great Streets overhauls that the city has set aside $250 million for altogether. Grand Concourse in the Bronx, and Fourth Avenue and Atlantic Avenue in Brooklyn are also getting the pedestrian-and-bike-friendly treatment.

The problem with the Boulevard of Life moniker, as my colleague Chris Robbins points out, is that when someone dies on the road, as will eventually happen, de Blasio critics will have a ready piece of ammunition to throw back in his face.