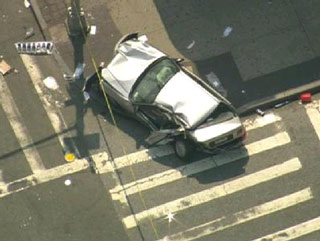 Yesterday, a five people were injured on Queens Boulevard at 47th Street when a Jeep Cherokee slammed into a Honda. The Jeep, which witnesses describe as trying to beat a red light, lost control and hit the Honda. The Honda, which had been making a turn onto Queens Boulevard, was crushed from the impact and then "plowed up onto the crowded sidewalk, pinning a 16-year-old boy against a lamppost."

Both legs of the boy, Tonpo Dorjee, who had only been in the U.S. a week, were crushed. His mother, who was also injured during the crash, told WNBC that she had been telling him how to cross the street, "I was telling him, 'This is a very dangerous place. You always look at the light. You just don't jump out. Just wait a few seconds then you go.' Two minutes later, this happens." The Daily News reports that while Tonpo's right leg was crushed, "it looked like doctors would be able to save it." Police are still looking for the driver of the Jeep Cherokee, which has Florida plates (W41BZU) and is missing a bumper.

Queens Boulevard is known as the "Boulevard of Death," there were 72 deaths between 1993 and 2000, and 12 deaths since 2001. City Councilman Eric Gioia asked that the Department of Transportation study Queens Boulevard; in fact, the DOT has examined it before. But after a fatal hit-and-run on Queens Boulevard last fall, one Gothamist reader commented:

like reality, i live a few blocks from the scene of the hit and run. there seems to be many reasons why people are struck by cars on queens blvd. one reason is the timing of traffic lights. whereas lexington ave has lights timed so that drivers drive at a steady and safe speed, queens blvd does not have any kind of pattern. you can be sitting in front of a red light and the next light can be green. then when your light turns green, the next light immediately turns red. frustrated drivers try to race through the yellows or run through the reds just to avoid this traffic (mis)pattern. you see it all the time.

Some believe that Grand Concourse in the Bronx and Eastern Parkway in Brooklyn are new Boulevards of Death; Houston Street is also another dangerous road.