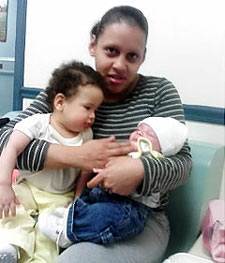 Charges against Kiana Paez have been upgraded to second degree murder in the death of her 11-week-old son, Pablo Paez. Three weeks after he was brought Elmhurst Hospital, doctors declared that the infant had suffered permanent brain death, and the child was removed from life support.

The recovering-addict mother brought her son to Elmhurst Hospital earlier this month, saying that her son had just stopped breathing. After an examination of Pablo by doctors and questioning of Kiana by police, she eventually admitted to hitting the baby in the face and accidentally dropping it on its head. A thorough examination revealed that the alleged abuse was much worse than just that.

Pablo Paez lived most of his short life in excruciating pain. He had been squeezed so hard that several of his ribs had been fractured and one of his legs was broken. The injuries were overlooked by Administration for Childrens Services workers, who had just paid a visit to the Paez home to check up on Kiana and Pablo.

The child's father doesn't believe Kiana was capable of such cruelty. Jose Fernandez said that he was 100% sure that Pablo's mother wouldn't have harmed her son and insisted that somehow, it must have been an accident.