Queen of Mean's Best Friend Is Rich And Despised 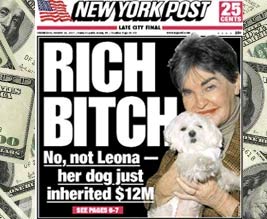 The most famous new heiress these days is Trouble, the Maltese dog who was left $12 million in owner Leona Helmsley's will. To put this in perspective, Leona Helmsley gave a chauffeur $100,000, two grandchildren $5 million each (plus another $5 million each if they visit their father's grave at least once a year), and two other grandchildren nothing "for reasons which are known to them."

Trouble has had a bad rap, even before becoming filthy rich. Zamfira Sfara, who worked as Helmsley's housekeeper for three months, says Trouble "bit her dozens of times" in 2004. Sfara, whose lawsuit for compensation after the dog bites was dismissed in 2005, spoke to the NY Times, wearing a brace on her right hand and contending that she still suffers pain from the bites.

The article also mentions a NY Post article where, when Andrea Peyser interviewed Helmsley, Trouble tried to bite Peyser multiple times. Sfara's son told the Times they will be looking into a legal assault on Trouble's inheritance: "That is the next step. That dog got money. That money is going to be taken away from that dog.”

Slate's Explainer tackled the question of whether Leona Helmsley's heirs could even contest her will. The answer is "maybe" but this was fascinating, "Without a successful challenge, the $12 million trust can easily generate $600,000 a year in income for the dog." And Helmsley's wishes that Trouble be buried in her $1.4 million mausoleum at Sleepy Hollow Cemetery will probably be for naught, because it's against the law to bury animals in cemeteries for humans.

And did you know that since Helmsley has left most of her estate into the Leona M. and Harry B. Helmsley Charitable Trust, the trust is now the 7th biggest in the country, with about $8 billion?