Quarantined Nurse Believes Her "Basic Human Rights" Have Been Violated

The health care worker who has been placed into mandatory quarantine in Newark continues to lambast officials from NY and NJ for their Ebola panic. Kaci Hickox, who has tested negative for Ebola twice and has not had symptoms, was on air with CNN today, sharing photos of her quarantine tent and slamming Gov. Chris Christie: "This is an extreme that is really unacceptable, and I feel like my basic human rights have been violated," Hickox said on State of the Union. "To put me through this emotional and physical stress is completely unacceptable" 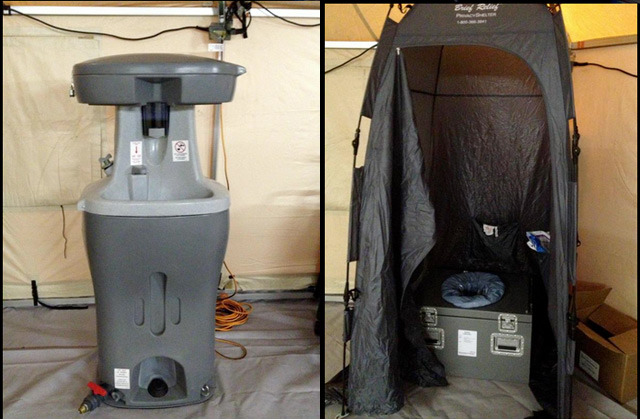 More photos from her tent

Hickox, a 33-year-old nurse who had been in contact with Ebola patients in Sierra Leone and became the first person to be placed under mandatory quarantine, was particularly angry with Christie. Christie has described her as "obviously ill," and said on Fox News this morning that he had "no second thoughts" about the mandatory quarantine policy. "I'm sorry if in any way she was inconvenienced, but inconvenience that could occur from having folks that are symptomatic and ill out amongst the public is a much, much greater concern of mine," Christie said. "I hope she recovers quickly."

Hickox responded: "I'm sorry, but that's just a completely unacceptable statement in my opinion. For him—a politician who's trusted and respected—to make a statement that's categorically not true is just unacceptable and appalling," she said in a separate interview with CNN. She believes that public health decisions should be made by public health officials, not politicians: "For the first 12 hours, I was in shock. Now I'm angry," she said. "To put me in prison is just inhumane."

As you can see from the photos, Hickox has no shower, no flushable toilet, none of her luggage, no television and no reading materials in her tent. She can't see her lawyer, friends or family because of the restrictions with the quarantine. "Everyone keeps asking how I'm feeling physically and of course I'm fine physically, but I don't think most people understand what it's like to be alone in a tent and decisions are being made that don't make sense and show no compassion," Hickox said while crying. "I just feel like fear is winning right now, and when fear wins, everyone loses."

Doctors Without Borders, the group Hickox had been working with in Sierra Leone, also have concerns about the quarantine: "There is a notable lack of clarity about the new guidelines announced yesterday by state authorities in New York and New Jersey,” said Sophie Delaunay, executive director of Doctors Without Borders. "Hospital personnel are keeping her in isolation and have not informed her of any next steps, including additional blood tests to confirm Ebola infection with certainty...Doctors Without Borders is very concerned about the conditions and uncertainty she is facing and is attempting to obtain information from hospital officials."

Stacie Newton, spokesperson for University Hospital in Newark, said in a statement: "While we understand that the required quarantine is an inconvenience, it is our primary goal to make sure the patient is as comfortable as possible. We have given our prompt attention to provide the patient with basic needs and to accommodate additional requests made by the patient."

#craig spencer
#ebola
#health care workers
#kaci hickox
#mandatory quarantine
#newark
#quarantine
Do you know the scoop? Comment below or Send us a Tip
A new Gothamist is coming! We’ve moved comments over to our beta site. Click here to join the conversation and get a preview of our new website.