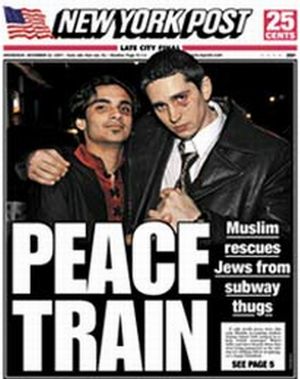 Hassan Askari, the Muslim college student who intervened in a violent subway attack against a group of Jewish riders, was honored at City Hall yesterday. The fight allegedly started when some thugs boarded a Q train yelling "Merry Christmas", prompting one of the Jewish riders to respond with a "Happy Hanukkah." Fisticuffs ensued, with one of the non-Jewish attackers shouting, "Happy Hanukkah, that's when the Jews killed Jesus!" One of the goons is also said to have exposed his tattoo of Jesus before the fight, because you know how Jesus was all about beating Jews.

At some point Askari stepped in to try and break up the fight and got a black eye for his troubles. The police eventually arrested ten people, some of whom may now be charged with hate crimes. But at City Hall it was all about the love (and publicity); Mayor Bloomberg presented Askari with a crystal apple donated by Tiffany's.

Mr. Askari, a native of Bangladesh who resides in Brighton Beach, said he was once the victim of an ethnic slur himself: Shortly after the terrorist attacks of September 11, 2001, during a trip to New Orleans, a group of men yelled at him, "Go home, Osama," an incident he called “very hurtful.”

And he’s still willing to stick his neck out for his fellow man, even when some violent racists – one of whom had a knife! – are getting physical. One time we warned a lady who was about to sit down on a subway seat with some water on it. Have you ever gotten mixed up in any subway incidents?