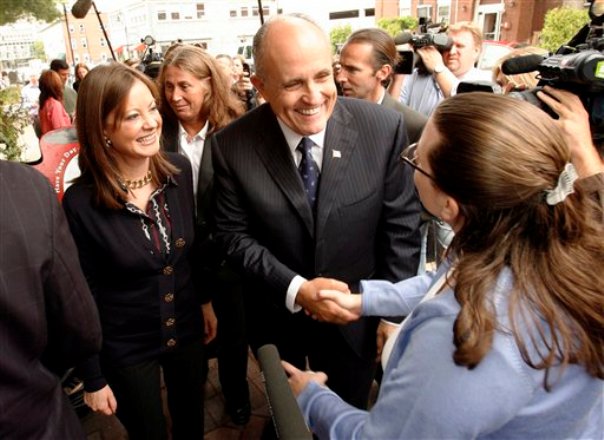 Rudy Rudy Rudy. Giuliani is getting it from all angles. Earlier this week, the Wall Street Journal's OpinionJournal.com's John Fund wrote an article, "Rude Giuliani." Fund referenced Giuliani's cellphone call with wife Judith during a very important speech in front of the NRA as just one example of all the times Giuliani is stopping for his wife's calls. He once left a room full of donors, who each paid $2,300 to hear him speak, to take a call from Judi Giuliani - and never returned. That's a classy move!

Mrs. Giuliani was on the campaign trail with her husband this week, and when asked if the call was faked, she wanted to answer the question. But Giuliani took over and said, "If this is the biggest thing they're going to raise, they're in a lot of trouble." Still, we can't help but laugh at the Daily Show's speculation that Giuliani would divorce Judi and marry a man named 9/11. And Saturday Night Live's Weekend Update had a good zinger - "Giuliani then told the audience, 'That was my wife reminding me to pick up some milk at the 9/11.'"

And today, the NY Times compiles some of Giuliani's greatest hits from his weekly radio show as mayor. Here's the interactive component with the clips that cover Giuliani's relationship with blacks, his thoughts on immigration, Pataki, and more. Yes, it includes David from Queens talking about ferrets!