Putting the Car Before the Horse 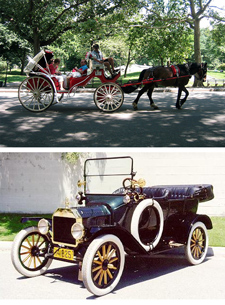 A plan is afoot to have horse drawn carriages around Central Park replaced by environmentally friendly classic cars, like the Ford Model T. The carriage horse business has come under increasing scrutiny recently as an outdated and cruel practice. Several incidents where horses were killed or injured after bolting in city traffic have galvanized opponents and some politicians to ban the use of horses in New York City. Technology remains a barrier, according to the Post.

One option would be the classic replicas that run on propane and hydrogen currently shuttling tourists around San Francisco. But Nislick said the coalition would prefer electric cars with zero emissions - technology that may not be available until 2010.

Councilman Tony Avella is interested in the possible substitution of cars for horses. He's already proposed a bill to ban horse drawn carriages in the city. Carriage owners insist that their animals are well cared for and think that a car ride won't have the same appeal as a carriage ride. Spokeswoman for the Horse and Carriage Association, Carolyn Daly, told the Post "No one wants to replace clip-clop, clip-clop with chitty chitty bang bang."

Photo of horse drawn carriage by wallyg at flickr