Stealing pumpkins is like jacking jewelry stores—you can't be afraid to get blood/pumpkin guts on your hands, and you've got to be able to live with yourself after the job is done. But over in the Pennsylvania town of York City, it seems that one would-be pumpkin robber just didn't have what it takes to go pro: after absconding with a 100-pound pumpkin that was left on a front porch—unguarded and practically begging to be boosted—the guilt-ridden thief brought it back with a note of apology.

The pumpkin belonged to 9-year-old Jaiden Newcomer, who won it at a contest by correctly guessing its weight. But the child learned a lesson about home security when he returned from a weekend trip with his family to find his precious pumpkin gone. As my father always used to say, "That's what you get for not locking up your pumpkins!"

But after the local York-Dispatch covered the story—adding the melodramatic touch that Newcomer intended to use the pumpkin "to make pies for people who can't afford it"—the bleeding-heart pumpkin liberator returned it, with a lengthy letter of apology:

I'm really sorry about taking your pumpkin, it was wrong of me, you earned the pumpkin, I didn't think my actions through nor realize who they were affecting. Sincerest apologies.

The thief remains at large. Newcomer, who, according to his mother, is "very excited," learned a valuable lesson about manipulating the media to his advantage. And instead of cooking the pumpkin, his family will simply purchase pre-made pies and donate them to charity. So that's the news from York City, where all the women are strong, all the men are good-looking, and all the children leave their valuables unattended without any real consequences. 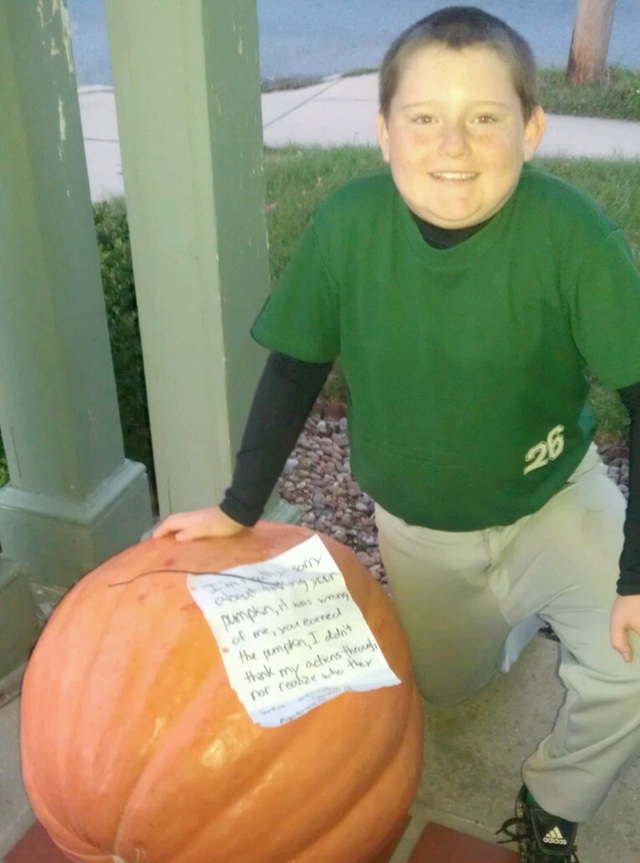 #barts people
#pennsyvlania
#pumpkins
#robbery
Do you know the scoop? Comment below or Send us a Tip