The Pulaski Bridge will finally be expanded in 2015 never! Never. But OK, we'll play along. According to Streetsblog, the expansion, which will finally convert one lane of the bridge's traffic into a two-way protected bike path, has officially been contracted out to a construction company, and it expected to be DONE done by the end of next year. Here's a rendering of what paradise looks like: 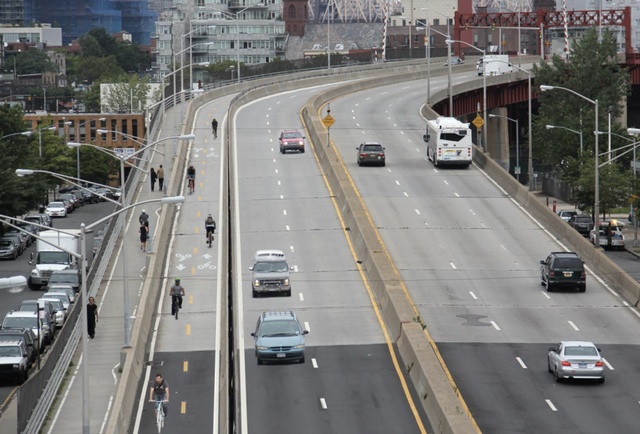 Speaking at an event in Long Island City, Assembly Member Joe Lentol gave voice to the thoughts of anyone who has been anticipating the expansion of the hazardously narrow pedestrian/bike path that links Greenpoint to Long Island City: “I’m here because I want to see this project through to its conclusion just like you do,” he said. “I’m very excited seeing this started. We’d hoped that it would’ve been completed by now.”

Indeed, it was 2012 when Lentol initially proposed the expansion: In the time since then, children have been born and learned to walk, and soon, they'll know firsthand the terror of squeezing past pedestrians and cyclists attempting to maneuver between the two boroughs, particularly since the media has turned its eye of Sauron in Queens' direction.

So why was the bridge delayed for so long? Back to Streetsblog:

DOT says there are two major reasons for the Pulaski delays. First, the project is linked to other bridge work. The city bundled 11 bridge projects totaling $15.6 million, including the $4.2 million Pulaski project, into a single contract. While the bike path is first in line among those projects for implementation, the contract couldn’t get approval without the other projects also being ready to go.

Second, DOT says the Pulaski Bridge itself complicates things. Opened in 1954 and rebuilt in 1994, the crossing is a drawbridge that opens about 400 times a year, mostly during low tides between October and April for barges delivering heating oil to a facility on Newtown Creek. The opened drawbridge cannot support the weight of an additional concrete barrier, so in the middle of the bridge, the project calls for eliminating the barrier that separates the current biking and walking path from traffic. On this stretch, pedestrians and cyclists will have physical separation from traffic, but not between each other, though unlike the current path there will be sufficient space for everyone. (Along other sections of the bridge, there will be two concrete barriers, separating the bikeway from both car traffic and pedestrians.)

The project's cost has also increased from an initial estimate of $3.46 million to $4.2 million.