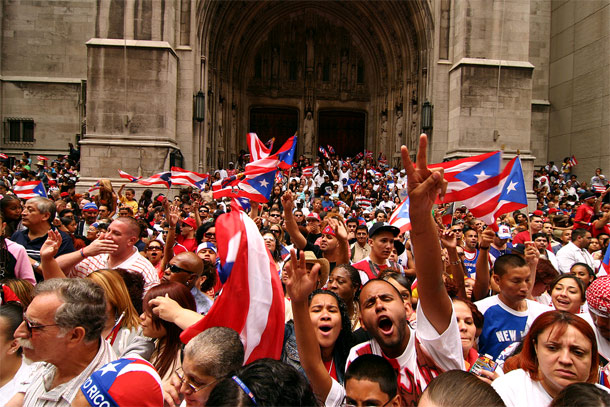 Deputy Police Commissioner Paul Browne said the breakdown of the arrests was 198 gang members (145 Latin Kinds, 40 Bloods, 13 Natas) and 10 non-gang members: "The parade organizers did not invite the Latin Kings, and they did not want them in the parade." But the NY Times managed to speak to a number of arrestees who were held in jail overnight and their family members, many of them wondering why they were arrested. A Legal Aid Society lawyer representing some of them said, "People said they were being told by the police that they needed this group to turn the corner; then when they obeyed, the police were waiting around the corner." Hmm, that sounds familiar. And then there's how the police targeted "gang members":

Several young men and women from Yonkers said they had been arrested because they were wearing yellow T-shirts with black lettering. They said the police had misconstrued their T-shirts, given to them by a friend to advertise his rap album, as Latin Kings shirts.

We wonder if people wearing red (and there were a lot of them at the parade) were arrested for being Bloods. And no Crips arrests?