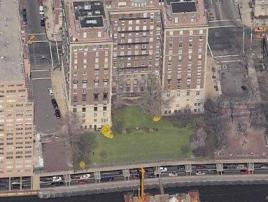 The city's attempt to increase its East Side park space has hit a boulder. A boulder in the shape of a swank Sutton Place co-op with rich and powerful residents who don't want their green backyard to become public park area! One Sutton Place South filed a lawsuit to stop the city from turning part of the building's half-acre backyard into a park, claiming that any action "violates the easement and constitutes an unlawful trespass." Sigh, this is what happens when the city takes land from a building to build the FDR - if only the time machine could bring everyone back to 1939 to write a better contract!

The city covered the FDR and created a park, which the building rented for $1/year. Now the building's legal fight involves talk of water lines, easements and the city violating the city charter. It's all very complicated and strange, which is probably why the building tried to keep it under wraps and made prospective buyers review the matter and sign confidentiality agreements. A judge granted an injunction preventing the city from doing any work, but should the co-op ultimately be required to turn over the park, they want $10 million in damages.

And in a tangential way, this reminds us to update the Gerritsen Beach spat. Last week, a Manhattan Beach resident sent an email to his neighbors, asking them to attend a meeting to discuss privatizing the beach, causing quite a bit of disbelief from people who know Manhattan Beach as a nice area. GerritsenBeach.net printed his suggestions last Friday, which included "Privatize the beach," "Charge an admission" and "Close the beach on a moments notice once the thugs, oops I mean people start to arrive." And basically setting up ID checkpoints. Today, GerritsenBeach.net noticed a large police presence: "Around 10 uniformed officers, a couple of white shirted officers, and a large Patrol Borough Brooklyn South Van. We also saw police officers from the 60th precinct who were there patrolling, which Manhattan Beach isn’t part of their precinct."

The Parks Department says there are no plans to privatize the beach.