Yesterday, family, friends and other members of the Hasidic community took a moment out of their mourning for slain Williamsburg landlord Menachem Stark to loudly condemn the NY Post. The Post's Sunday front cover had a photograph of Stark and alluded to his numerous questionable business dealings, asking, "Who didn't want him dead?" Elected officials were also outraged: City Councilman David Greenfield noted that Stark was a husband and father of eight, declaring, “This clearly crosses the bounds of decency and demands an immediate apology from the newspaper to the grieving family and the entire community. The murder of an innocent man is not something to be celebrated in New York City."

The protesters joined politicians like Brooklyn Borough President Eric Adams, NYC Public Advocate Letitia James, State Senator Simcha Felder and many others at Brooklyn Borough Hall. James suggested that the government stop advertising in the Post, "Today the Post has reached new low. You have given license to murder." Adams, like many others, demanded that the Post apologize, telling the press, "We stand as One Brooklyn in condemnation of the New York Post’s coverage of the murder of Menachem Stark... The New York Post’s decision to hang him in effigy on the cover of today’s paper, just hours after his family has begun to sit shiva, is a betrayal of the journalistic integrity that its readership deserves."

Of course, the Post refused to apologize, issuing this statement: "The Post does not say Mr. Stark deserved to die but our reporting showed that he had many enemies, which may have led to the commission of this terrible crime. Our thoughts and prayers are with the family at this time of loss." And this gave the Daily News to opportunity to report on the controversy, describing the Post as a "down-market tabloid." 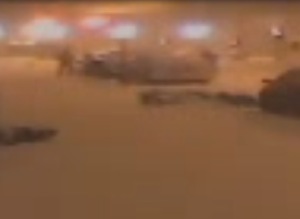 From surveillance footage showing the kidnapping

Stark, 39, was kidnapped on Thursday night, with surveillance footage showing two men struggling with Stark and then forcing him into a Dodge Caravan. He was reported missing on Friday and his family offered a $100,000 reward for his return. However, his burned body had been left at in a dumpster a Getty gas station in Long Island, where workers thought a cigarette had been burning until the "horrible smell" alarmed them.

While described as generous and charitable by friends and other community members, Stark and his business partner had defaulted on multi-million dollar loans and also upset some tenants in Greenpoint apartments with their lack of attentiveness. According to the NY Times, "At 239 Banker Street, a former factory Mr. Stark converted into trendy lofts, the building racked up a series of serious violations, including lacking a certificate of occupancy and working without a construction permit. In September 2009, after an inspector found workers had plastered over fire sprinkler heads, the city ordered the building vacated. Residents tried to contact Mr. Stark to recover their security deposits, but lost them when he proved elusive, they said."

Brother-in-law Moses Strulowitz told the Daily News, "The attacker is not from the Jewish community. “We don’t hurt each other... It was a hit job. It looked like a Mafia job or either anti-Semitic.” Another brother-in-law, Zalman Kaufman, said, "This was not professional. A professional guy doesn’t throw him into a public dumpster."

Stark's business partner Israel Perlmutter is reportedly worried he'll be targeted as well: "Perlmutter is 'loaded up with security guards,' said another source in the Satmar Hasidic community. 'Everyone was talking in the synagogue that he’s afraid he’s next.'"

#brooklyn
#greenpoint
#hasid
#kidnapping
#landlord
#menachem stark
#murder
#ny post
#williamsburg
Do you know the scoop? Comment below or Send us a Tip