Say you're one of the 1.2 million New Yorkers with an open warrant for public urination, stoop drinking, or a missed court date of some other kind, and you have the misfortune of being arrested on Staten Island. You spend the night trying to sleep on a filthy cement floor at Central Booking surrounded by strangers and hope you don't have to make use of the communal toilet with no seat. At some point, a guard calls your name. It's your turn to meet with your court-appointed lawyer, or, if you're connected, a private attorney you called.

Off of the holding cell there is a door leading to five alcoves. You sit in one and looking back at you through shatterproof glass is your lawyer. You have just a few minutes to consult about your situation before it's the next person's turn. This is your only chance to strategize before a bail hearing, where a prosecutor could argue you're a menace to society and should be shut away at Rikers Island for months or years awaiting trial.

Starting Monday, with the opening of the new $230 million Criminal and Supreme Court courthouse by the Staten Island Ferry Terminal, that crucial conversation is being recorded and the footage kept by the Department of Correction. Tina Luongo, attorney in charge of the Legal Aid Society's criminal court public defenders, said she first became aware of the cameras during a December 2014 tour of the under-construction courthouse. She says Legal Aid, the only indigent defense service for Richmond County, objected to the Mayor's Office and the Correction Department then, but that they ignored the demand for the cameras to be kept out. On Monday morning, Legal Aid lawyers interviewed and arraigned client after client like normal, but had to warn each that they were being recorded and shouldn't speak openly. 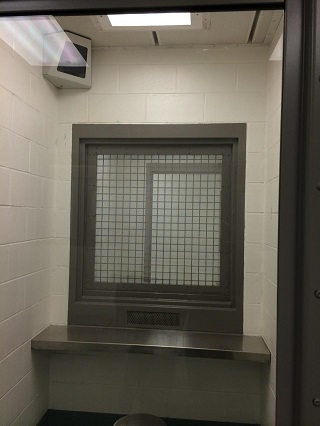 Cameras face the clients in the attorney interview booths at the new Staten Island courthouse.

The Department of Correction deferred to the city's Law Department when questioned for this article, and the Law Department has not responded to a detailed request for comment. The Mayor's Office said the cameras are needed for security purposes and pledged to keep the microphones off. Luongo and Deborah Wright, president of the Association of Legal Aid Attorneys, UAW Local 2325, said that the security argument is nonsense, and one need only look to the other four boroughs' criminal courthouses, which don't have surveillance cameras in interview booths, for proof. For that matter, Luongo said, there are booths for defendants being transported in from Rikers in the new Staten Island courthouse that don't have cameras either, and even those on Rikers itself lack them.

"The only time [guards] aren't watching [inmates], there's a lawyer there, so it's a safe situation," she said of the typical arraignment interview setup.

Legal Aid plans to sue the city soon, arguing that the cameras violate a commonly recognized right for lawyers to have a place to meet confidentially with clients in any courthouse. Luongo said that DOC logging the footage for 90 days leaves open the possibility for prosecutors to subpoena it, and even with the sound off, a diagram of a crime scene or a show of an identifying tattoo are nonverbal types of communication that could be compromised. Wright described arraignment interviews as a terrible sort of blind date.

"Arraignments is the most crucial step in the beginning of a case, and it's hard enough as a lawyer to go into a booth and basically say to a stranger, 'Hi, I'm your lawyer and you have to trust me,'" she said. "Now...the lawyer has to immediately say to a person, 'Don't say a word. Look above your head. Do you see that there is a camera here?'"

Mayor de Blasio has pledged to cut Rikers Island's inmate population by a quarter over the next decade and speed the process by which people churn through the system. Luongo said the new cameras will have the opposite effect.

"So much energy is being put by this administration to try to get people off of Rikers, to try to get them out of [pretrial] detention," she said. "It shocked my mind that this same administration would limit us in being able to fully speak to our client, and have our client demonstrate things that would actually have them released."

A Mayor's Office spokeswoman said that the cameras are pointed at defendants only, the city thinks it is legally in the right to use them, and city lawyers will review the lawsuit when it is filed. She said further that the Correction Department will comply with any court orders regarding the footage, and that "visibility" is a driving principle of recent and in-the-works jail redesigns. Asked for examples of specific security risks posed by un-monitored booths, she said she did not know of any offhand.

Mayor's Office spokeswoman Sarah Solon called the surveillance cameras "cutting edge improvements" that "protect the safety of inmates and officers at all times."

#department of correction
#legal aid society
#public defenders
#right to an attorney
#staten island criminal court
#surveillance
#original
Do you know the scoop? Comment below or Send us a Tip
A new Gothamist is coming! We’ve moved comments over to our beta site. Click here to join the conversation and get a preview of our new website.