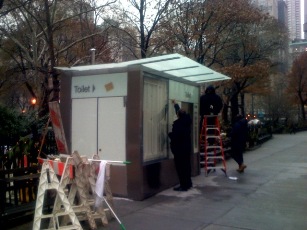 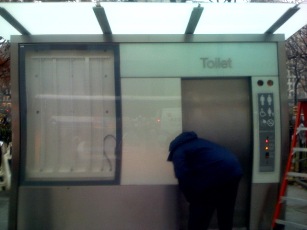 Nine months. That's about how long pregnancies take and that's about how long it took for various agencies to coordinate bringing Manhattan its first new public bathroom. Community Board 5 approved a new, sleek glass-and-silver bathroom from Cemusa to be placed in Madison Square Park back in March and Promediacorp witnessed it being installed this morning.

Of course, back in March, the NY Times reported it would be up and running by the summer, but we know how bureaucracy works (slowly; the deal with Cemusa was finalized in 2005). The toilet is located in the southeastern corner of the park - near Shake Shack - and our big question is how the metal toilets will fare in the cold weather. The next one is expected to be in the Bronx.

And in an odd bit of timing, the Post reports that many newsstand operators who are now in the sleek Cemusa newsstands are "beset by leaks, and complain about waiting weeks for phone-line installations to get their lucrative lottery machines up and running." Not only that, the gate lock deadbolts proved to be powerless against vandals who ended up stealing one newsstand's "cigarettes, lottery tickets, money and phone cards." Cemusa claims that they are aware of the issues and have daily inspections, but the newsstand operators say theirs have never been inspected on a daily basis. Let's just hope the locks on the bathrooms are secure enough for people to do their business without worry.