"Psycho Cyclists" Terrorizing Central Park, According To One Person And A Speedometer

August is typically a "slow news month," so today the Post has vibrators on the cover, while the Daily News puts cyclists in the cross-hairs with a dog-bites-man cover story about cyclists who pedal fast in Central Park. (There's also a matching editorial blasting the "two-wheel travelers" who "think they belong to a privileged class that owns the city by virtue of being environmentally friendly and physically fit." Damn cyclists and their rippling thighs bulging through all that skintight spandex... ) Like the NYPD before them, the News set up a speed trap in Central Park and clocked cyclists shattering the 25 mph speed. When will Mayor Bloomberg finally ban muscular calves?

To bolster their shocking revelation that cyclists ride fast in the park, the News gets a single quote from park pedestrian Natalie Valenzuela, who says, "They’re very aggressive and they don’t stop. They don’t really pay attention to the lights. They ride on the paths where they are not allowed." Mmm, that's good fishing, Daily News! "Cyclists killed my only daughter in a ritual sacrifice to satisfy Goddess Sadik-Khan then crammed her mouth full of cheery-sounding bells and impaled her head on a stick in front of the cemetery," said another pedestrian we just made up to help the tabloid out. 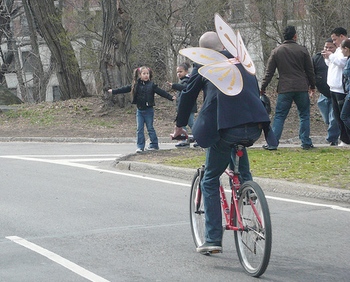 The News also makes this unsubstantiated assertion, citing "city officials" and E.R. doctors: "As the number of commuter bike riders has quadrupled in the last decade, so have the number of bike-vs.-pedestrian accidents." WOW, there are four times as many bike vs. pedestrian accidents as there were ten years ago?! There's no citation for this frightening "factoid," so we'll just have to take the Daily News' word for it, and why wouldn't we, since their cyclist coverage is always so rigorous and unbiased?

In fact, the only study cited by the News is a "recent" Hunter College study that actually came out in September 2011. The controversial study found that 1,000 pedestrians are struck by cyclists each year in New York State. That made great scaremongering "Psycho Cyclist" headlines, but the study also showed a drop in pedestrian injuries caused by cyclists between 2007 and 2010. And Streetsblog persuaded the Hunter College researchers to provide them with the local data, which also showed that "the number of pedestrians injured in crashes with cyclists fell in NYC by around nine percent between 2007 and 2010"—even as the number of cyclists skyrocketed. 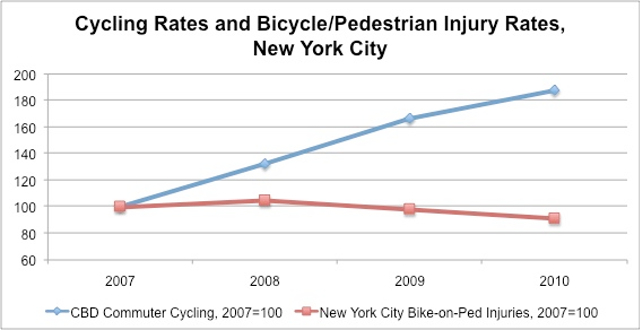 And of course, missing in all of this is any rational acknowledgment that motor vehicles—which New Yorkers have repeatedly tried and failed to ban from Central Park—are responsible for far more injuries and deaths than cyclists. "Everyone must follow the law—bicyclists, drivers, everyone," says Transportation Alternatives spokesman Michael Murphy. "But drivers are 365 times more dangerous than bicyclists, according to the City's own data [pdf]. That says a lot about where the NYPD should be devoting its limited resources."

Here's the thing: anyone who's spent ten minutes walking on the Central Park loop knows there's no shortage of inconsiderate aggro cyclists—we're referring primarily to the high-testosterone would-be Lance Armstrongs who blaze around the park in packs screaming at everyone to get out of the way. But if the Daily News is really concerned about safety issues in Central Park, shouldn't there at least be passing mention of the reckless drivers ruining what is supposed to be an urban oasis? A cab driver ran over somebody's dog in Central Park Tuesday—the Daily News didn't report it, but had it been a cyclist, it would have been splashed all over the front page. Doggone Biker Rides Ruff-Shod Over Schnauzer!

#central park
#cyclists
#tabloids
Do you know the scoop? Comment below or Send us a Tip