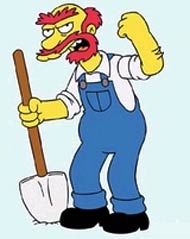 Henry Logue made almost $100,000 in salary and overtime last year, but continued to live in a paint shed at state-run Rockland Psychiatric Center, according to the Journal News. Apparently he had been living there for three years--even registering his car there--all while his wife lived in a home 3 miles away.

Though the psychiatric center had told employees they were not allowed to stay on campus past their shifts, Logue managed to make himself comfortable. A report explained, "An examination of the room revealed a couch, microwave, refrigerator, and numerous personal items belonging to Logue." He also received mail there. Somehow, the state determined rent for the space is about $75/month, so Logue will be charged over $2,500 for squatting.

Logue made $58,849/year and, last year, he earned another $40,000 in overtime; his boss couldn't explain why Logue made so much, but the Journal News points out the hospital has been criticized for not keeping very good records. State auditors also found that over a dozen other employees were sleeping at the hospital during the check.

#odd
#pain shed
#rent
#rockland county
#squatting
Do you know the scoop? Comment below or Send us a Tip