PSA For the Locked Out: Call a Locksmith 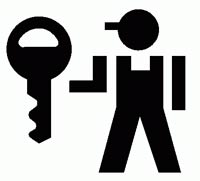 A 30-year-old man lost his life last night after locking himself out of his apartment. Sometime between 8:15 p.m. and 8:40 p.m., Paul Reilly fell five stories, landing on his back in the courtyard behind the building where he lived on 65th St. and 1st Ave. in Manhattan. Reilly, who had apparently gained entrance to the building but was locked out of his apartment, attempted to climb out a hallway window, over to a window in his apartment. "It was just an accident. He fell," a friend told the Daily News.

The New York Post describes a slightly different scenario, with Reilly attempting to scale the back wall, before losing his footing and crashing downwards into the courtyard. A neighbor in the building next door to Reilly told the Post, "I heard a clunk, a huge clunk. Then I heard some guy saying 'Oh, s- - -! Oh, s- - -!' really loud."

Reilly was taken to New York-Presbyterian Hospital Weill Cornell, where he was pronounced dead around midnight.