PS, You May Have Hepatitis 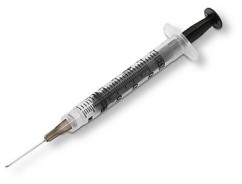 How would you like to get a letter from your doctor saying, surprise, you may have hepatitis? Well that's exactly what happened to patients this week who received injections from a certain Nassau County doc. Six hundred thirty patients were contacted by the Nassau County health department who advised them to seek testing for hepatitis B, C as well as HIV.

This is due to a confirmed case of HCV transmission between two patients at a non-disclosed Nassau County clinic - thanks to the re-use of contaminated syringes. Though the risk of transmission for these diseases is quite low, authorities are still advising otherwise well-feeling patients to get screened. Anyone seen at this particular clinic between 2000 and 2005 will be notified by letter.

All three of these viruses are contracted via contact with infected blood. The hepatitis C virus infects the liver and can lead to cirrhosis and hepatocellular carcinoma. According to the CDC, the incidence of HCV seroconversion (developing antibodies to the virus indicating infection) after a needlestick is about 1.8% (based on a reported range of 1-7%). Catching HIV from a needlestick is far less common at a reported incidence of about 0.09%.

In Chicago, it was just revealed that four people found out they got not only hepatitis C but HIV as well from organ transplants.

#chicago
#health
#hiv
#In Chicago
#nassau county
#news
#people
#this week
Do you know the scoop? Comment below or Send us a Tip
A new Gothamist is coming! We’ve moved comments over to our beta site. Click here to join the conversation and get a preview of our new website.