As public outrage mounts over reports of inmates being deprived of heat and other basic necessities at the Metropolitan Detention Center in Brooklyn, family members of the incarcerated—and over one hundred supporters—gathered on the steps of the federal jail on Saturday to demand answers about their loved ones.

"Why can't they give him some blankets?" cried one mother, standing alongside more than a dozen other anxious parents, siblings and spouses of inmates. Through tears, she said her twin grandsons were worried about their father, and that they had been denied entry into the facility earlier in the week. "I don't know what's going on in there. They're humans, they're not animals."

Behind her, a sign on the doors of the facility declared that all legal and social visits were cancelled until further notice. From above, inmates could be heard banging on the narrow windows of their cells, producing a steady clatter that spread for blocks along the industrial waterfront stretch of Sunset Park.

Big crowd outside MDC right now, as inmates bang on windows above pic.twitter.com/BHCxMtqHuZ

According to a spokesperson for the Bureau of Prisons, the jail is currently on a partial lockdown after an electrical fire tore through the switch gear room last Sunday. After initially denying allegations that inmates were left freezing on the coldest week of the year, the agency acknowledged in a statement on Saturday that about half the jail was experiencing limited power. They noted that contractors were working "as expeditiously as possible" to install an electrical panel, and insisted that inmates were not being deprived of blankets, hot water, food, or medication.

But elected officials who toured the detention center on Saturday painted a dire picture of conditions at the 1,600-person jail: They said hundreds of cells were still freezing, and all of them were without light. Shivering detainees complained of being confined to their dark cells for days, many of them unable to access the computer system through which they request medication. Officials say they observed leaky ceilings, towels stuffed into vents as insulation, and some inmates struggling to breathe. As of 2 p.m., the jail's population still had not been fed.

He has not been granted the device he needs to breathe or a medical visit, so he has been lying on the floor to try to breathe through the crack under the door. This brother hasn’t even been convicted of a crime. #MDC

"What we saw was intolerable, it was disgusting and it was immoral," Rep. Jerry Nadler told the crowd after emerging from the facility. By then, the electricians contracted to restore power had already left for the day, and Bureau of Prisons Warden Herman Quay did not expect them to return all weekend, according to Nadler. "There's a total lack of urgency or concern on the part of the prison administration with respect to getting the heat and the hot water, getting the services we need," he said.

The crowd grew agitated in response, vowing to camp out on the street outside the complex until power was restored. "If y'all freeze, we freeze," some chanted. Later on in the evening, dozens of corrections officers descended on the protesters, with one official slapping a woman's phone to the ground and stepping on it. Some of the protesters who stayed overnight said they saw ambulances leaving the facility late in the evening. (Authorities could not immediately confirm any medical incidents).

*Thing just got intense. About 25 Corrections Officers came out in force. At around 20 seconds in, you’ll see an officer slap a phone out of a woman’s hand. What you don’t see is he then steps on it. And forcefully pushes past her. pic.twitter.com/QYmx2iVjqz

Mayor Bill de Blasio, who'd previously declined to comment on the reported outages, said Saturday that the Bureau of Prisons was "refusing our help, even as their incompetence is on full display for the world." Later, he tweeted that the city was sending trucks full of blankets, hand warmers, and generators, regardless of whether they'd be accepted.

But despite the show of support from local officials, some family members said they wanted authorities to do more to stand up for their incarcerated relatives. Many wondered why the inmates couldn't be moved to other facilities, or whether a judge could force the jail to immediately restore heat and other services. While a federal judge has ordered the Bureau of Prisons to explain the "contradictory accounts of the conditions at MDC," the agency is not due in court until Tuesday.

David Patton, executive director of the Federal Defenders of New York, said his office has filed dozens of emergency bail petitions for their clients, but those cases won't be heard until at least Monday. 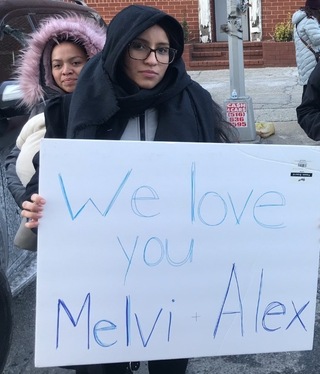 In the meantime, some family members fear the worst for their loved ones. A woman named Nat, whose brother is serving a six month sentence at MDC, said she was terrified that her sibling might not be receiving his diabetes medicine, which needs to be refrigerated. "I asked a [corrections officer] if he was getting his medication and he just gave me a blank stare," the woman said. "They can't even answer basic questions about his human rights."

She emphasized that the alarming conditions witnessed at the federal jail this week were not an isolated incident. By the time the public was made aware, her own brother had been complaining to her of his freezing cell for weeks, she said. The account was echoed by Councilmember Jumaane Williams, who said he'd heard from inmates that the warden routinely turned off heat as a punishment.

"Whatever happened here only exacerbated the problem that already existed," Williams told the crowd. "The only way they would have cared is if it was white, preppy students who were in there."

For many family members, the hardest part is being left in the dark, not knowing what their loved ones are going through and having no way of finding out. The jail’s staff still hasn’t offered any explanation for why inmates have been cut off from visitors and phone calls for the past week.

Valentina Roman said that she was informed by prison staff earlier this week that she could send a letter to a partner, Melvi, who has been awaiting trial for six months. But those letters never made it to the jail, and turned up back in her P.O. box a few days later. Roman, who's currently pregnant, said her two other children haven't been able to talk to their father for over a week.

“I wish I could tell them he’s okay, but we don’t know,” she said. "It's really cold right now. We're so worried."