A small but determined group of demonstrators gathered at Franklin Avenue and Kingston Avenue in Crown Heights last night to protest the ceremonial killing of chickens in the Kaporos ceremonies that take place in Orthodox Jewish communities the week before Yom Kippur.

The ritual requires that the chickens be held by their wings and swung three times in small circles over the heads of family members while a prayer is read aloud.

Kaporos is Hebrew for "atonement." The sins of the celebrant are symbolically transferred onto the chicken, and after the ceremony, the chicken is slaughtered and either eaten or donated to a food bank. The public rituals usually take place in the two days leading up to Yom Kippur.

Technically, Kaporos doesn't require chickens. "They could be swinging money or anything," Karen Davis, the founder of Alliance To End Chickens As Kaporos said. "It makes Judaism look ridiculous." 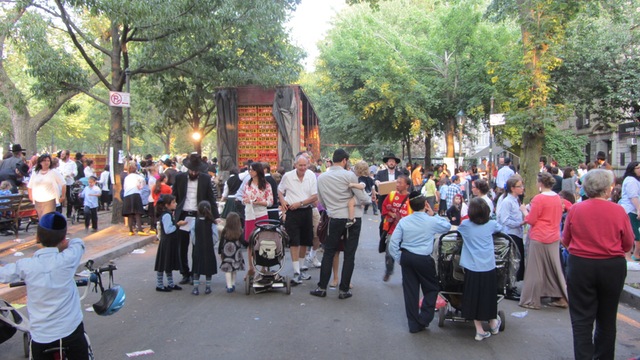 One of the biggest points of contention is the swinging of the chickens by their wings, which Rina Deych, one of the organizers of yesterday's protest, says is "excruciatingly painful. They're boiler chickens, bred to be too heavy for their wings to support. Many times the wings break and the ligaments rip."

All told, there were around 20 protestors in a sectioned off pen, parallel to but also often surrounded totally by, families performing the Kaporos. 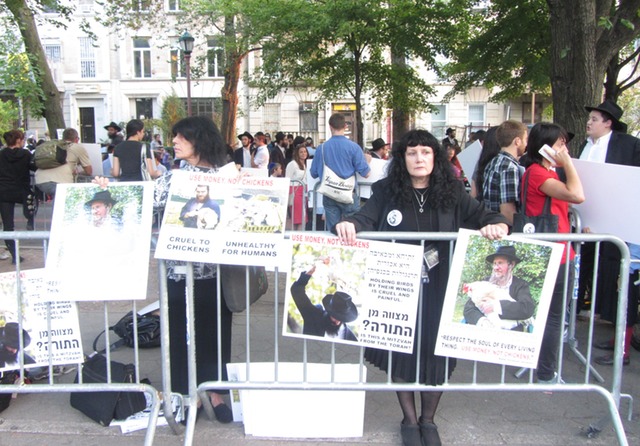 Young children engaged most with the protestors, while the teenagers present spent their time taking photos of and with the activists. The children were the most eager to argue and defend their customs and community. Likewise, the activists seemed eager to engage and discuss the custom with them. 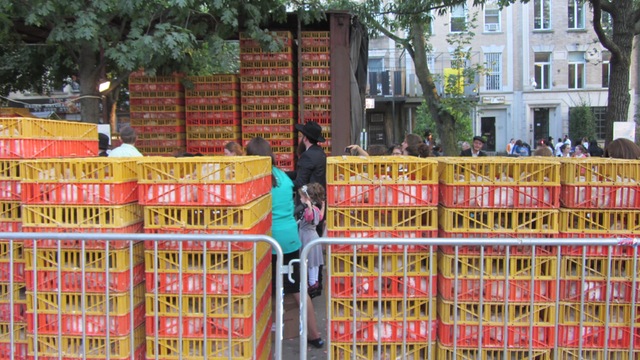 Still, the atmosphere was tense, riddled with belligerence and yelling. Moments of classic trolling—blowing feathers onto the protestors, taking pictures, accosting specific families as they were performing the prayer—produced angry responses.

Asked about the antagonism, Deych said, "Unfortunately I can't control everybody. Sometimes, yes, they do lash out. I don't because I think it's counterproductive." The goal, Deych explained, is "to plant seeds, to raise awareness, [and] ultimately to end the use of chickens. This is a big money-making operation and they don't want to give it up so quickly, [but] more and more Orthodox rabbis are coming out and speaking out against the use of chickens."

As the protest approached 8 p.m., however, the number of people on both sides of the fence dwindled. 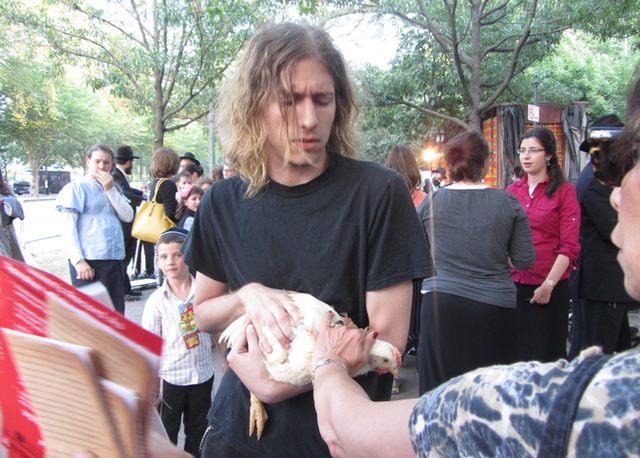 One of the demonstrators holds a chicken he saved, procured for five dollars. (Gothamist)

#Crown Heights
#kaporos
#orthodox judaism
#yom kippur
#original
Do you know the scoop? Comment below or Send us a Tip