A Donald Trump rally took a frightening turn last night after someone in the crowd accused a man near the stage of having a gun. However, it was later revealed the alleged gun-toter was just waving an anti-Trump sign.

Trump was in Reno last night at a campaign rally to make a final appeal to his base (and to whip up more fears about voter fraud). At some point in the speech, a protestor approached the stage, and someone in the crowd yelled he had a gun.

Trump was rushed off the stage by Secret Service agents, and the man accused of being armed was detained by authorities. Trump was allowed to return to finish his speech, where he said "Nobody said it was going to be easy for us, but we will never be stopped. We will never be stopped." The Secret Service later reported that there was in fact no armed individual at the rally.

The Trump campaign has been fully supportive of open carry in the past, going as far as to endorse people openly displaying firearms during the RNC in Cleveland. The Trump campaign's website also proposes passing a national right to carry law.

The man detained by authorities was later identified by The Guardian as Austyn Crites, who said he was merely holding up a "Republicans Against Trump" sign while he made his way forward to the stage. Crites, a self-professed Republican who said he had canvassed for the Clinton campaign this year because he saw her as the only way to stop a Trump presidency, also said that rally attendees assaulted him when he got near the stage.

Crites said that "people were wrenching on my neck, they could have strangled me to death" and that rally attendees kicked him, punched him, held him down on the ground and "grabbed at his testicles." The claims of assault will be familiar to anyone who's even barely paid attention to the election, and they go back to the earliest days of Trump's campaign when he declared he wouldn't take any responsibility for the atmosphere at his rallies and offered to pay the legal fees of a man accused of sucker punching a protestor. In addition to allegedly assaulting Crites that night, rally attendees could be seen violently shoving a cameraman who left the press pen:

@brianstelter Video of camera man who left the press pen being harassed by Trump supporters caught by Right Side Broadcasting live feed. pic.twitter.com/bNHQrA4UTK

The cameraman identified himself as CNN's Noah Gray, who said the incident happened as he was trying to capture the scene of Trump getting hustled off the stage.

The Trump campaign played up the incident as an assassination attempt, even after the Secret Service had said they didn't recover a weapon from Crites. During the invocation at a Trump rally in Denver after the incident, the speaker called at an attempted murder:

Donald Trump, Jr., a sentient tube of hair gel that would like to buy you a drink, pretty lady, also retweeted someone who framed the incident as an assassination attempt, and has yet to un-retweet it. 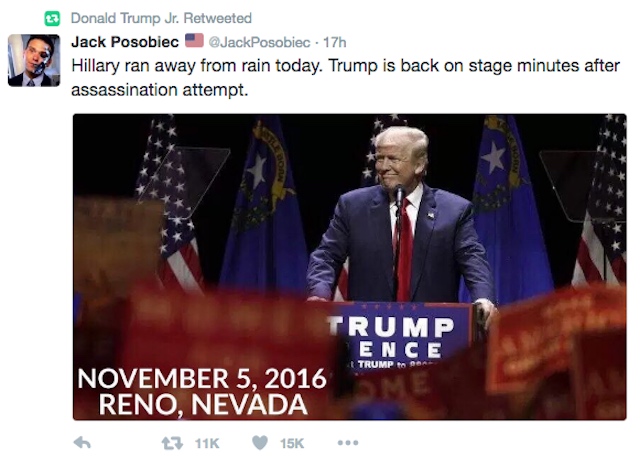 Say what you will about all of the weird stuff that's happened during the election, but Kellyanne Conway has has done a great job of showing that women can be amoral political vampires just as well as men can. Looks like we didn't break just one glass ceiling in 2016.

#donald trump
#election 2016
#what happens in reno spreads to the rest of america like a cancer
Do you know the scoop? Comment below or Send us a Tip