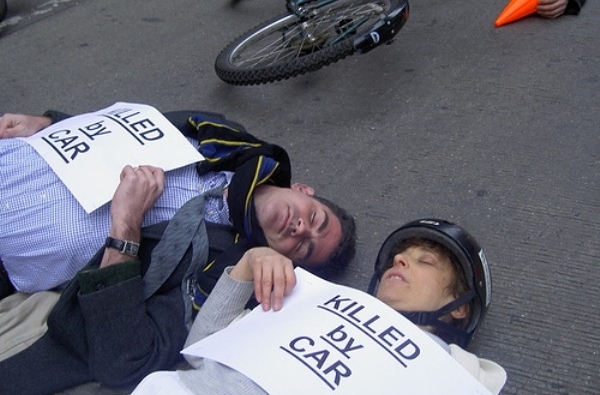 If you thought noticed a group of bicyclists playing dead on 6th Avenue near 33rd Street, your eyes weren't fooling you. Time's Up led a Bike Lane Action to "dramatize the fatal last moments of David Smith’s ride up 6th Avenue." Smith was killed when a passenger in a truck, parked in the bike lane, opened a door; Smith was knocked off his bike and into the path of a truck.

A Time's Up volunteer told NY1, "What we're here to try and do today is both honor someone who has passed, as well as ask the city to fulfill its promise to make this a bike-friendly city." Time's Up says that the city should provide safe, buffered bike lanes for cyclists.

Earlier this week, the Staten Island Advance wondered if its borough's bike lanes were too perilous - for instance along busy Hylan Boulevard, cars are parked in some parts of the lane, other parts of the lane are covered by branches and leaves. And one resident thinks sidewalks should have come first, "These lanes are in an area that has five public schools and none of the students can walk along Hylan, let alone ride a bicycle."

More photographs of the bike lane "die-in" here and a video, Bike Lane of Death, here.