Protesters Surround Trump Tower As The President Arrives In NYC

President Donald Trump is set to return to his New York City home tonight, and hundreds of New Yorkers have already gathered outside Trump Tower at 56th and 5th Avenue to protest his arrival.

A woman has been roughly arrested by the NYPD across from Trump Tower. pic.twitter.com/S8JZ7imHTy

"I was a political refugee from the Soviet Union 40 years ago. I came here because I am against the exact type of government they're trying to impose here," Beshenkovsky told Gothamist. "The secrecy, screaming about leaks, they admire strong arms. Our so-called president doesn't know how government works. He wouldn't pass a naturalization exam. I'm trying to enjoy the democracy while it lasts — nobody can say how long that will be."

She added, "All my friends were dissidents. We had no freedom of speech, no freedom to read the books we liked. If United States loses its role in world, there is nothing left. U.S. was always a beacon. I looked at Americans as free people. I absolutely hate what's going on, it's crushing."

Natasha, a 73-year-old refugee from the Soviet Union: "I'm trying to enjoy democracy while it lasts." pic.twitter.com/vKtm85ycUx

NYers already crowding thick around #trumptower: "we want to show him that we don't respect him" pic.twitter.com/JhK63RgFw7 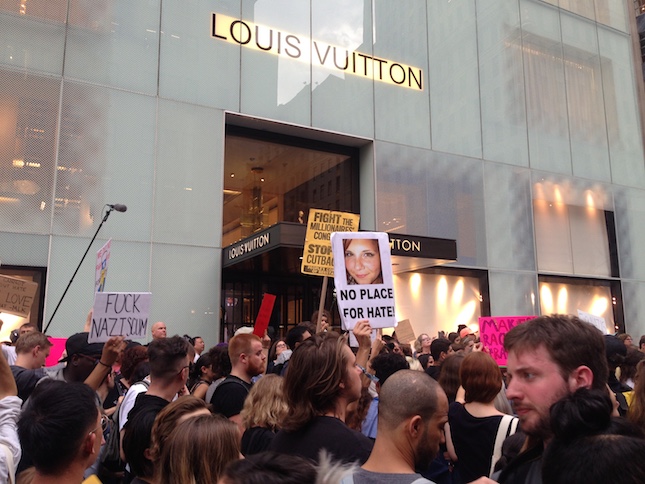 Eric Wilson, 30, was carrying a sign that said "Resist Whiteness," which he explained was a challenge for white people like himself to "confront that as white people, how has this identity been used to…make money at the expense of other people, even when we don’t mean to."

"There’s a kind of everyday violence in whiteness that goes beyond white supremacy," he added.

Wilson's friend, Zach Pace, said he was at the protest to "show solidarity with all our citizens" after a woman was killed and dozens were injured during Saturday's white supremacist, alt-right rally in Charlottesville, Virginia. President Trump waited until Monday afternoon to specifically condemn the violence.

Ryan Ellison, from the Bronx, works at Bergdorf Goodman on 58th and 5th, near Trump Tower. "It's kind of an odd experience," Ellison said of the frequent anti-Trump protests. "I've worked here for eight months but it's not something I'm used to. More times than not I get to see how much people care about what's going on in their community. They're trying to make a change, so I'd say it's nice to see." 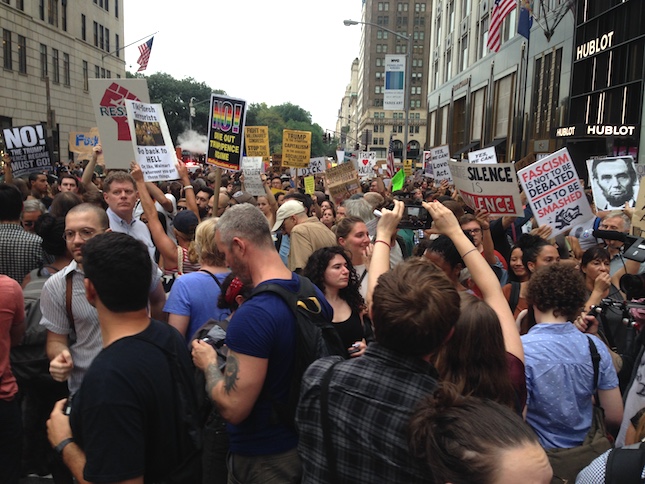 Trump supporter, after a protester tells her all the babies are going to be brown and black by 2050: "That's disgusting. Do you want that?" pic.twitter.com/STSWc6bBaE

At 7:30 p.m. the crowd has swelled to around 1,000 people. No sign of the presidential motorcade yet.

Heshy Friedman, a 57-year-old Orthodox Jew from Flatbush, was part of the counterprotest, holding a sign that said "Google Orthodox Jews Voted For Trump / We Will Again In 2020."

Friedman, a consultant, said he was unperturbed by the sight of neo-Nazis in Charlottesville.

"The college campuses are being infiltrated by Muslim radicals, which is due to Obama bringing in hundreds of thousands of them," Friedman said. "If there's anyone whose bringing protection, it's Trump. [It's] one of the main reasons the Orthodox Jewish community voted for Trump."

Carlos Rivera, a 20-year-old college student, who was at the protest with his friend Samuel Andre, 21, said he was astounded to see such "ignorant mindsets" gather at an institution like the University of Virginia.

"Knowing what the Nazi symbol represented, we’d all be dead, not just me as a person of color, but you, and you, and it just doesn’t make sense," he said. "It’s crazy!"

As of 8:24 p.m., the NYPD's press office was not able to confirm any arrests.

There's also a contingent of protesters that appear to be headed west on 59th Street.

Marine One with @realDonaldTrump lands in Manhattan. pic.twitter.com/SXeygLGoBY

The crowds outside Trump Tower are still waiting for the president to arrive.

severa blocks of protesters still waiting on trump (we think. unclear if he's arrived or not yet) pic.twitter.com/YgsE1WKvI2

Several blocks of protesters lining the west side of 5th Avenue between 56th and 55th,
chanted of "New York hates you/the whole world hates you" and "Fuck Trump" when the motorcade drove by shortly after 9 p.m.

Home again. @realDonaldTrump is back at Trump Tower for the first time since his inauguration as president. pic.twitter.com/nToUkwhuw0

On Tuesday the president is scheduled to stay in Trump Tower to sign an executive order "establishing discipline and accountability in the environmental review and permitting process for infrastructure projects," and then "a statement on the infrastructure discussion."

#donald trump
#protests
#Trump Tower
Do you know the scoop? Comment below or Send us a Tip