The issue of luxury high rise apartments contaminating Central Park with their looming shadows has gained renewed traction in recent months—and some Brooklyn residents fear that Prospect Park will soon be in a similar position.

A group of protesters last week managed to delay the 23-story, 254 unit Hudson Companies development poised to rise at 626 Flatbush Avenue, a building that residents of the Prospect Lefferts Gardens neighborhood fear will not only denigrate the quality of the park with shadows, but, more pressingly, drive up costs in what has long been one of Brooklyn's few strongholds of reasonably-priced real estate.

On Friday morning, a group of opponents assembled to bar entry to cement trucks intending to pour the building's foundation, which they successfully achieved until police arrived and made an arrest, Brownstoner reports. Their efforts, however, may have been unnecessary: Later that morning across the city, a Manhattan judge issued a temporary injunction on the work while the court mulls whether Hudson Companies conducted an adequate environmental review.

Alicia Boyd, who has lived in the neighborhood for 14 years, worries the new development will set an undesirable precedent for other developers looking to build along Flatbush Avenue, which she said was already one of the most densely populated areas in Brooklyn. "It's going to cause a tremendous amount of congestion, and also issues as far as public services," she said following a protest held at City Hall last month, adding that the current tallest building in the area is only 12 stories. "This will be literally 50 percent taller than any other existing structure around the park."

She also worries that the luxury highrise's accompanying luxury rents will force longtime residents to leave the largely Caribbean community—particularly since PLG lacks the zoning laws enjoyed across the way in Park Slope, meaning 626 Flatbush may be just the beginning. "There's a long strip that developers can keep building for the next four of five years until we do the rezoning," she said. "So that means in the next five years, we could just have a slew of high rises all along the perimeter of the park that you'll be able to see from everywhere."

But Alison Novak, Hudson Companies' Vice President and Director of Fund Investments, said the fears of rampant development are unwarranted. In addition to 20 percent affordable housing—17 percent low income and three percent "very low income"—the ground floors will be zoned for retail and a "community facility space," loosely defined as "anything that serves the community," like a doctors office or a daycare. 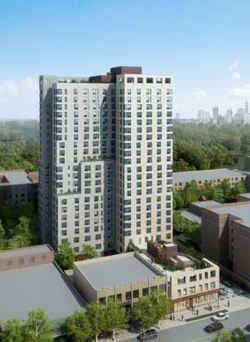 "We think it's going to be a great asset to the neighborhood," she said. Though Hudson Companies won't release estimates for the market priced housing, she said a low-income one-bedroom apartment will cost around $730 per month, and a very low-income apartment would cost around $570, though the exact prices will be set by the Housing Finance Agency.

Regarding criticisms that Hudson had not conducted an adequate environmental review, Novak said the company had performed its own, "the way every developer does."

"It's not accurate to say there was nothing done," she said. "I think what neighbors worry about is that it wasn't as extensive as they would like it to be."

"Everyone is New York recognizes that we have a housing crunch," she said. "In order to deal with a housing crunch, we need more housing." She referred to fears of shadows eating up the park as "grossly overstated," saying that the size and shape of the buildings make them less intrusive than nearby Patio Gardens.

Opponents remain resolute that expensive residential towers are not the answer to NYC's affordable housing crisis. To that end, a rally organized by a coalition of neighborhood groups will be held on the steps of City Hall on Friday from 1 to 2 p.m., with the goal of instating "sensible rezoning" and "retaining and expanding PLG's existing affordable housing." Visit the Prospect Park East Network's website for more information.

#brooklyn
#prospect lefferts gardens
#prospect park
Do you know the scoop? Comment below or Send us a Tip