Protesters Slam Real Estate Summit At Brooklyn Museum: "It's Like Vultures Descending On The City" Hundreds of real estate developers and investors streamed into the Brooklyn Museum on Tuesday morning, past a 65-foot cloth banner proclaiming "Brooklyn Is Not For Sale!" Nearby, dozens of local artists and community activists shouted "Greedy! Greedy!", protesting the institution's decision to host the sixth annual Brooklyn Real Estate Summit.

"White dudes in fancy suits is all I see," said Olivia Fox, a performance artist from Queens. Fox, who was holding up one end of the banner, is a member of the Brooklyn Anti-Gentrification Network (BAN). "The Brooklyn Museum is supposed to serve Brooklyn, and it should be serving its most vulnerable population first and foremost," she added.

A BAN petition with more than 1,000 signatures as of this writing implored the museum to cancel the event—hosted by Green Pearl—citing record rents and a near-record homeless population—more than 56,000 New Yorkers were enrolled in city shelters as of August.

Undeterred, and for $500 per ticket, participants in today's summit sat for development-friendly panels like "Next Stop, Opportunity! How Developers and Investors Take Hints from the Subway Map." The bulleted agenda was more blunt, covering the merits of mixed-use developments that "capture the hearts, minds and wallets of the new Brooklyn residents" and the potential value in "overlooked neighborhoods."

Summit participants have already changed the landscape of Brooklyn in significant ways, like AptsandLofts (the broker for Brooklyn's very own colonizers) and Forest City Ratner, the developer behind Atlantic Yards.

"It's literally like vultures descending on the city saying, okay, what neighborhoods haven't been gentrified yet?" said Faith Pennick, a filmmaker from Lefferts Gardens. Meanwhile, "Everything is becoming more expensive, like going to a museum. Either I hold on to my apartment for dear life or, if it crosses a threshold, I'll have to leave." 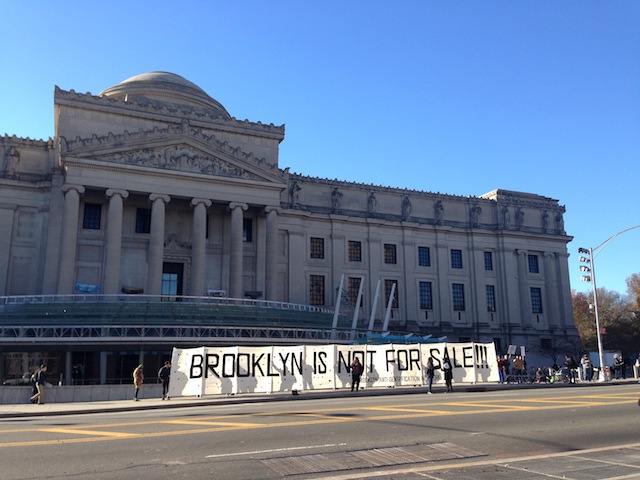 Many New York artists see a blatant contradiction in the timing of the summit, which falls between two museum exhibitions heralding activism and local art. Crossing Brooklyn: Art from Bushwick, Bed-Stuy, and Beyond ran from October 2014 to January of this year, and spotlighted 35 borough-based artists and collectives. And December 11th will mark the launch of Agitprop!, a 20-artist exhibition that highlights "struggles for social justice since the turn of the twentieth century" from women's suffrage to economic inequality activism.

A spokeswoman for the Brooklyn arts collective Not an Alternative spoke with us on condition of anonymity, explaining that the museum had commissioned one of her organization's projects for Agitprop!—a collection of bright orange miniature tents spray-painted with phrases like "Housing For All" and "They Say Gentrify, We Say Occupy."

On Tuesday, the tents were spread out along a stretch of Eastern Parkway in front of the museum. "We didn't want the art to be presented in that historical, dusty context, but rather to make it living and breathing," she said. "Rather than just showing them inside the museum in a month, we brought them to the protest, here." 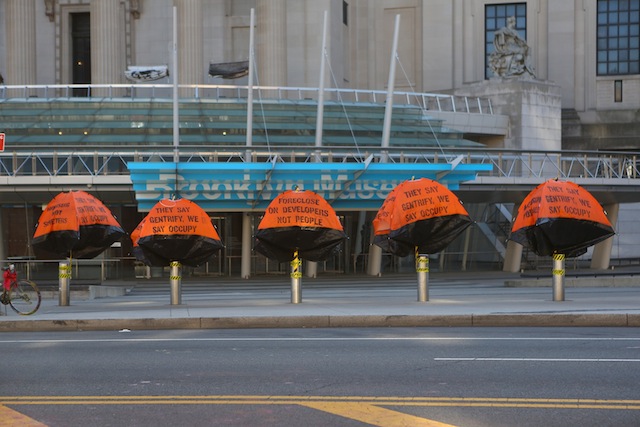 BAN spokesman Imani Henry sees the summit as an endorsement of gentrification and, by extension, the criminalization of art that doesn't hang in museums—in many cases, art created by black, Latino and working-class men and women.

"As a Brooklyn-based artist, our art is criminalized all the time," he said. "Graffiti is considered a crime; the MTA took out an ad to demonize Black and Latina youth who do show-time performances on the train. And at the Caribbean Day Parade we have a thousand cops lined up where all of our musicians and performers are at. Our art is criminalized and our neighborhoods are displaced."

Other protesters said that artists have, historically, heralded gentrification. "Most artists aren't engaged with what's happening in this city. It's their fault for not talking to their neighbors," said Fox.

But Sarah Quinter of the artist collective People's Climate Arts argued that artists have a choice when it comes to promoting, or challenging, gentrification. "Let's be real: sometimes 'artist' is just a code word for white people," she said. "And there's a class implication, too. But it's not that simple. Art can be a scab for gentrification, or it can be against gentrification."

Quinter, who lives in Bushwick, saw her rent increase 30% last year. Living in an un-stabilized apartment, she says she fears eviction. "We're seeing how much of a collusion there is between real estate and art institutions," she added. "It's a time for artists to say that we don't want art institutions in bed with this industry that's damaging us." 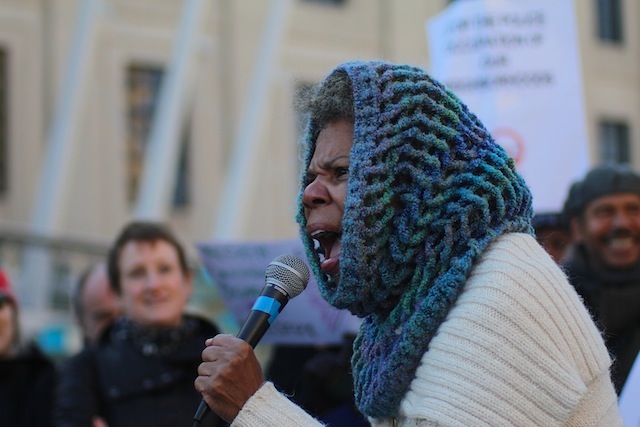 Alicia Boyd of Flatbush said, "Brooklyn Museum is constantly hosting black artists and yet they are supporting an event that will be displacing those very artists that they are supposed to be investing in." (Ellen Moynihan/Gothamist)

On November 5th the Brooklyn Museum assured activists that summit organizers had been informed of their "concerns," and that "by renting the museum for this event, we are not expressing opinions regarding the matters discussed in the conference." Three days later, museum director Anne Pasternak issued a more thorough breakdown of her efforts—the museum had asked the summit to invite an artist to address attendees; it would "take a close look" at its hosting policies in the future.

This morning, museum staff piled a folding table high with doughnuts within reach of the protesters, over a sign that read "Enjoy."

But BAN refused to send a spokesperson to the summit, arguing that the event was "in direct opposition to the needs of the majority of people who are struggling to pay rent in Brooklyn."

Faced with opposition from BAN, summit speaker and Brooklyn Borough President Eric Adams issued a statement: "I welcome those protesting the forum outside the museum because their message needs to be heard, and I intend to share that message on the inside," he said.

Pennick, the Lefferts filmmaker, was skeptical. "I think that's going to fall on deaf ears for the most part," she said. "These developers may be nice people in general, but they're not here to do good. They're here for profit."

Summit organizers did not immediately respond to a request for comment.

From 4:00 to 6:00 p.m. on Tuesday, artists and protestors will mount an anti-gentrification art exhibit outside of the museum entitled "Double-Crossing Brooklyn." It will coincide with the real estate summit's cocktail hour.

UPDATE: Pasternak sent a statement to all Brooklyn Museum members shortly after 5:00 p.m. on Tuesday. "While we are a civic organization that represents many communities, and like all museums in the city, we rent ourselves for functions ranging from public school graduations to weddings, bar mitzvahs, and conferences such as TEDYouth," she wrote, "we also understand that with the widening income inequality and the increased cost of living in New York City, why artists and others were upset."

Pasternak went on to reiterate measures she has taken to address community concerns, like inviting artists to speak at the summit and hosting a separate forum on affordable housing. She also stated that protestors declined an invitation to meet with her to "discuss their concerns."

UPDATE Wednesday: Despite statements to the contrary from Pasternak, BAN has stated that, "The Brooklyn Anti-gentrification Network was never contacted directly by Anne Pasternak or any other Brooklyn Museum employee."

UPDATE Thursday: Paddy Johnson of the arts publication and nonprofit Art F City was affiliated with the evening protest, and says that Pasternak spoke to her twice over the phone in the days leading up to the event. Johnson says that Pasternak also spoke with the NYPD, and helped negotiate an uninterrupted protest. Pasternak did not, however, reach out directly to that event's lead organizers.