The Department of City Planning abruptly canceled last night's public meeting to discuss a proposed housing development in the Broadway Triangle, a plot of land that borders Bushwick, Bed-Stuy and Williamsburg that has sparked contentious battles over rezoning over the last nine years. Representatives from development company The Rabsky Group had been scheduled to present their plans to the city and the public at a public school auditorium in Williamsburg, but the meeting was called to an abrupt end after a group of raucous protesters refused to let them speak.

Chaos erupted at the moment a City Planning representative called the meeting to order. A young woman rushed one of the speaker's podiums and declared that the proposed Rabsky development, which would contain a mix of retail, green space, market rate housing and affordable housing, "wasn't for us, and we're going to shut this down." The auditorium, which was populated almost entirely by opponents of the project, erupted into chants as people waved signs, blew whistles and noisemakers and eventually began marching around the room chanting "Shut it down" and "Si se puede."

City officials sat and watched the chanting and marching, which eventually stopped—but only to allow for a couple of short speeches to be delivered through a bullhorn. Council Member Antonio Reynoso told the crowd through a bullhorn, "I want to be perfectly clear with the City of New York, that what they're seeing today is a community saying that no decisions get made here without our input first," and said opponents of the project would stay until 10 o'clock at night and "pitch tents if they have to" to shut the meeting down.

Evelyn Cruz, a representative from Congresswoman Nydia Velazquez's office, focused on the problems of the city-owned land in the triangle that was rezoned, and told the crowd that "it's un-American to have a community divided by race, by ethnicity in 2016." In 2009 a judge ruled that the rezoning of the city-owned land in the Broadway Triangle violated the Fair Housing Act by tilting development too heavily in favor of the neighborhood's ultra-Orthodox Jewish residents at the expense of the area's black and Latino population.

When it became apparent that order would not be restored, the City Planning representative called the meeting to a close. The slideshow, table and poster-board were all packed up, and the gathered opposition marched out of the auditorium cheering. The "meeting" lasted for about 15 minutes.

Council Member Reynoso didn't characterize the night as a victory, later telling reporters that the night was "about this community letting the de Blasio administration know that if they want to develop in this community, the process they've gone about is not the one we're going to move forward with." Reynoso said he wanted a process similar to Bridging Gowanus, "a forum where people are putting stickers on the wall, whether they say they need more supermarkets or they say they don't mind 12 story buildings if they get 80% affordable housing. Let the people decide what they want to see." 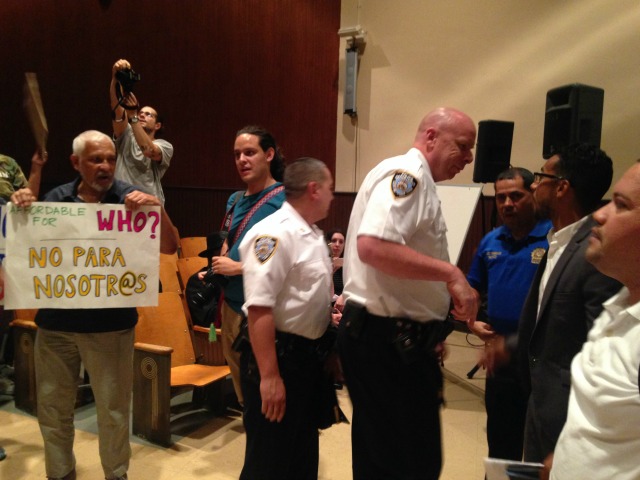 Reynoso also criticized the Rabsky Group for what he called broken promises in regards to affordable housing at the Rheingold Brewery development, as well as a community jobs and training program Rabsky was supposed to participate in but hasn't, according to Reynoso.

"As a City Council we have to be careful about that," Reynoso said. "How do we hold them accountable for not following through with community-based commitments if we allow them to build somewhere else?"

The Rabksy Group did not respond to a request for a comment on last night's meeting. The proposed development is on a lot bordered by Harrison Avenue, Gerry Street, Union Avenue and Wallabout Street. It would be made up of eight buildings between five and 14 stories tall, containing 1,147 apartments, with 344 set aside as affordable housing under the city's Mandatory Inclusionary Housing rules. The development would also contain 64,807 square feet of retail space and 26,000 square feet of public green space.

The proposed rezoning of the lot from manufacturing to residential would need approval from the City Council. Council Member Stephen Levin, in whose district the project and rezoning request sits, spoke to us after the meeting ended—he said he hadn't seen Rabsky's proposed development yet, and had hoped to that night.

Levin said that the Rabsky Group was entitled to the same process as any private landowner initiating a rezoning of their property. Characterizing the scoping meeting as specifically existing to get public input into the project, Levin said "what the action today did was deprive a private owner of property from their due process by shutting down the workings of government. And that's not how we operate as a city, as a society. We have a representative government, we're governed by laws. I'm very concerned about what happened tonight, because that's not how we address our differences."

A City Planning spokesperson issued this statement following the meeting: "Tonight's meeting was intended to listen to all sides to help shape a required environmental review of a private land use application. It's never acceptable to prevent the public from being heard and we intend to reschedule the meeting to ensure that the public has that opportunity."

#antonio reynoso
#broadway triangle
#chaos
#stephen levin
#original
Do you know the scoop? Comment below or Send us a Tip