Dozens of protesters gathered yesterday in the steadily-lengthening shadow of 626 Flatbush Avenue, a high-rise luxury development in the Prospect-Lefferts Gardens neighborhood of Brooklyn. Not only is the tower an eyesore on the perimeter of Prospect Park, they argue, but only 51 of 626 Flatbush's 254 units have been set aside as affordable housing. They claim that building manager Hudson Companies is listing "market rate" studios in the building at a whopping $1,850 per month. (Hudson Companies vice president Alison Novak told us that market-rate prices won't be set until construction is complete.)

Last June a group of protestors went so far as to block cement trucks attempting to pour the building's foundation, temporarily delaying construction. Yesterday's protesters, led by the Alliance for Tenant Power, were primarily concerned with the tax breaks that make buildings like 626 Flatbush possible.

The Alliance is adamantly opposed to the 421a tax abatement program, which incentivizes developers, Hudson included, to build up unused land in exchange for temporary freezes on their real estate taxes.

The four-decade-old state program is up for renewal this June, and these protestors want to see it abolished. They argue that 421a tax breaks cost taxpayers $1 billion annually but produce little in the way of affordable housing. One billion, they argue, is enough to fund 100,000 rent subsidy vouchers for poor New York City residents.

Delsenia Glover, who runs the Alliance for Tenant Power, estimates that about 75 protestors showed up yesterday, to chant "Hey hey, ho ho, 421a has got to go!" and "The tenants, united, will never be defeated!" The hour-long protest was uninterrupted, except for a "number of minutes" when a police van blared its siren in order to get protesters who had spilled into the street to return to the sidewalk.

"[626 Flatbush] is going to be a luxury development in the middle of a neighborhood that is working class," Glover said. "And folks are afraid of escalating rents and displacement. We believe that 421a leads to gentrification, and is a program that's outlived its usefulness. If it were not for 421a, that would have meant $1.1 billion dollars in the coffers that could have been used for so many other things." 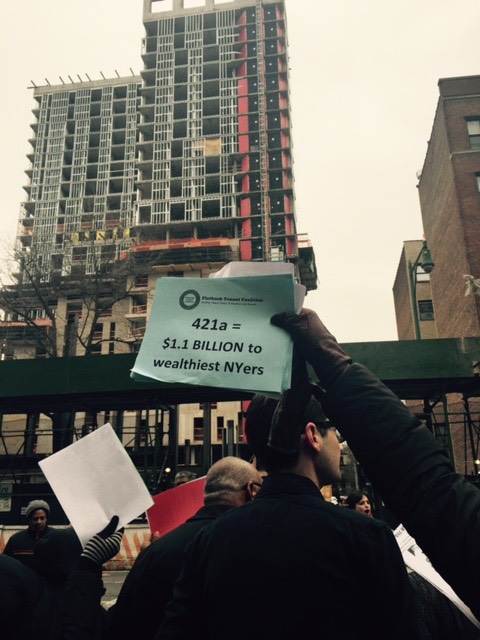 Speakers at yesterday's rally included Diana Richardson and Shirley Patterson, both of whom are running for the open Assembly seat in the 43rd District, which represents Prospect-Lefferts Gardens. Richardson told us yesterday afternoon that even if 421a prevails, there are some first-step compromises that might be implemented. For example, "The number one thing we need to tackle with 421a, is the Area Median Income that's being used [to determine low-income rents]. Currently the city is using the New York City AMI of $75,000, which is not reflective of this community's AMI, which is roughly $45,000."

Richardson added, "We really should be unionizing these [construction] jobs, to insure that the workers who are building these tall buildings are safe, and that they are getting fair wages. Any building that is built with 50 units or more, and is getting state subsidies, should be unionized. Because the unions are reflective of the people who are living in the communities."

Glover, for her own part, suggested that the taxpayer money that would normally go to 421a might instead fund Section 8, a federally-funded program that offers vouchers to supplement the cost of rent for low-income families.

Kerri White, Director of Organizing and Policy at the Urban Homesteading Assistance Board also attended the protest. She told us, "We're on hold for Section 8 vouchers. There are no new vouchers because we don't have the money for them. Which is really frustrating for a lot of tenants in this neighborhood. Flatbush and Crown Heights are experiencing extreme gentrification, and everywhere tenants turn they are seeing their neighbors being pushed out. Tenants get the feeling that they're not going to be able to stay."

Hudson Companies VP Novak emphasized that 20% of 626 Flatbush's units will be affordable. "We're proud to have built one of the first 80-20s south of Prospect Park," she told us.

#421a
#626 Flatbush
#affordable housing crisis
#alliance for tenant power
#flatbush
#original
Do you know the scoop? Comment below or Send us a Tip