Over 100 Inwood residents gathered at the intersection of Sherman Avenue and Broadway on Saturday to protest the construction of Sherman Plaza, a luxury tower proposed by Acadia Realty Trust. The development, which happens to be the first project proposed under Mayor de Blasio's recently-passed affordable housing plan, cannot be constructed unless the City Council approves a spot rezoning for the site.

Under the new Mandatory Inclusionary Housing (MIH) program, 20% of units in Sherman Plaza would be required to be affordable for New Yorkers who make approximately $31,000 a year, 40% of the Area Median Income (AMI). But affordable housing advocates say for residents of Washington Heights and Inwood, where the average annual income is roughly $37,000 a year [pdf] for a family of three, 20% of units in a new development is not nearly enough.

"What's being passed off as affordable is not really affordable," Ava Farkas, Executive Director of the Metropolitan Council on Housing, told Gothamist. "AMI takes into consideration an area beyond the neighborhood, beyond the confines of New York City." 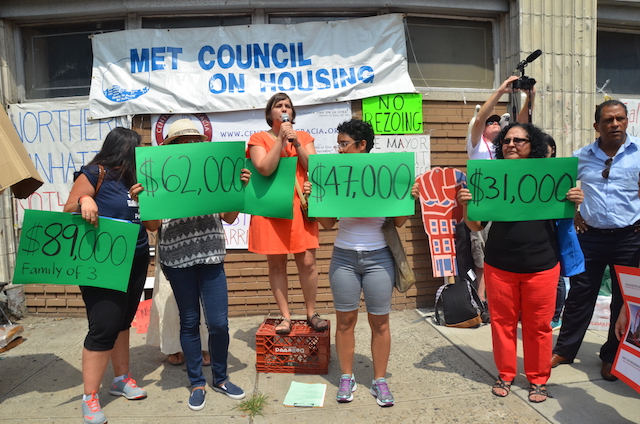 During the rally, Farkas and other MCH staffers held up signs displaying the wide range of income brackets that were lumped into Sherman Plaza's affordable housing designation, ranging from $31,000 to $89,000 a year. "Is this affordable to you?" Farkas asked the crowd. "No!" they responded.

Although a handful of politicians—including Comptroller Scott Stringer and a few current candidates for the State Senate and Assembly—attended the event, organizers only allowed those who had openly opposed the rezoning plan to speak before the march began.

"When we need help, I don't see our elected officials standing in front helping us. Now that we've got the press, now that we've got hundreds of people and it's an election year, they want to come out and show their faces," said George Fernandez, former chairman of Community Board 12. Fernandez is currently running for a seat in the State Assembly. 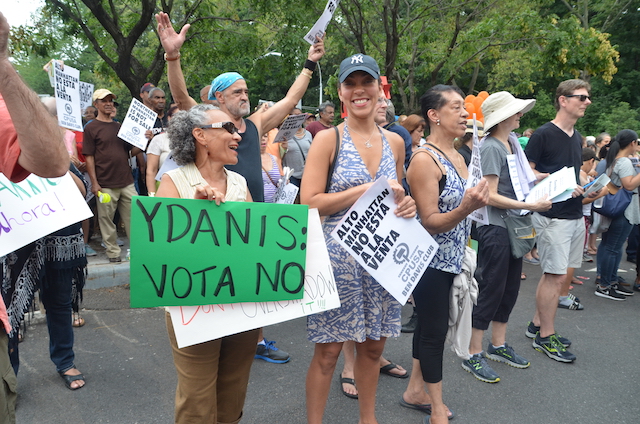 Fernandez's comment could have been interpreted as a jab at City Councilman Ydanis Rodriguez, whose district includes Inwood and Washington Heights. Rodriguez's unexpected presence at the rally spurred tensions in the crowd. One NMN4S organizer, who noticed Rodriguez's arrival before the rally officially began, warned another: "Do not let him speak."

Even if Rodriguez was not allowed to speak, his presence was clearly felt. "We're calling on Ydanis to stand up for justice," Farkas declared during her address. Upon hearing his name, the crowd began to chant, "Fuera! Fuera!" ("Out! Out!" in Spanish). As the speakers progressed, some began to yell "Let him speak!" while others continued to order the councilman to leave.

Rodriguez stormed the podium just before the march was scheduled to begin. As soon as he grabbed hold of a megaphone, organizers told protesters to begin marching and the group momentarily splintered: some began to march, others stayed behind to hear what Rodriguez had to say. The councilman eventually joined protesters, taking to the streets and marching alongside them to St. Jude's Church on 205th Street and 10th Avenue, but not everyone was convinced he came out with the community's best intentions in mind.

Ana Orreña, who has lived in Inwood for 60 years, expressed frustration with Rodriguez. "We need people who will help us," she said to the crowd gathered at St. Jude's in Spanish. "From the moment we elect people to represent us, they're supposed to be committed to us. But really, all they do is defraud us."

"I think it's for show, to show that he's walking in the community, but he's not doing anything to take care of us," said Laurie Summer, an Inwood resident of nearly 20 years. "He's not standing up and saying no [to Sherman Plaza]."

"I haven't made a decision on where I'm going to stand," Rodriguez told Gothamist. "But [these] are the two positions we have in front of us: one is the application [Acadia] filled out two weeks ago, to build 14 floors as a right. The other is the 15-floor building, with 50% affordable housing, 25,000 square-feet provided free of charge to cultural institutions, and 10% of the commercial rent dedicated to local small businesses."

After the rally ended, Rodriguez's staffers and a few remaining protesters clashed in the St. Jude's parking lot. On Twitter, the councilman accused protesters of spreading "Trump-like" misinformation.

Upsetting to see Trump-like actions uptown, playing on peoples fears while spreading lies about development. We stand against gentrification

David Friend, a protester who has lived one block from the planned Sherman Plaza site for nearly 10 years, told Gothamist that Rodriguez implied he was a gentrifier and could therefore not comment on the situation. "You make three times what I do. Your salary is public record," Friend told Rodriguez.

"He's selling this idea that the rezoning would make 50% of the building affordable units, but he isn't saying that only 20% of that is mandated through MIH. The rest would be up to a deal that hasn't been worked out yet with the developer," Friend said. 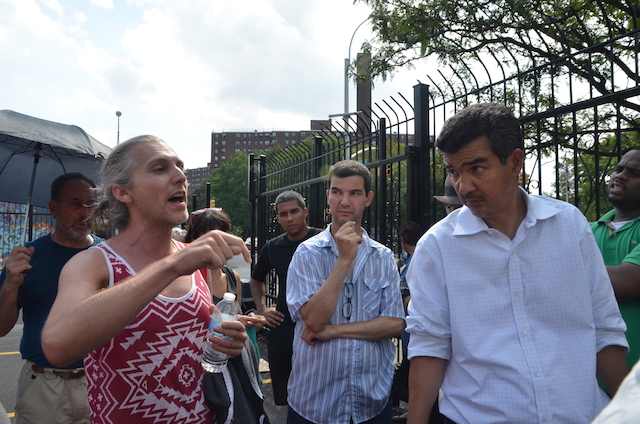 When asked for comment, Russell Murphy, Rodriguez's Chief of Staff, clarified that the 30% of affordable housing that was not required by MIH—as well as the 25,000 square-feet of community space and 10% of discounted retail space—was still being negotiated with Acadia.

Katherine O'Sullivan, who has lived in Inwood since 1993, was more concerned with the consequences of rezoning than with the luxury building itself. "[Acadia wants] the rezoning so they can flip the site and sell it for a profit. Once the site is rezoned, they can sell the site and whoever buys it is not obliged to any affordable housing agreements." A similar situation happened at the Rheingold Brewery site in Bushwick, which is currently being taken over by luxury developments.