Seen from ground level, the demonstration down in Battery Park City last Friday afternoon defied conventional protest logic. Instead of rallying tightly in a unified mass—the kind that has recently shut down streets and crippled JFK's Terminal 4—hundreds were stretched out into single-file lines that that slanted at acute angles and stretched wide and thin across the bright packed snow.

But seen from 100 feet up, their purpose became clear. Organized into letters, Friday's attendees spelled out '#NOBAN' across the lawn at Rockefeller Park, forming a human banner in rebuke of President Trump's second travel ban against six predominantly muslim nations. As a drone flew overhead taking photos and video, each protester lifted the flag of one of the countries singled out by the ban—Syria, Iran, Somalia, Yemen, Libya, and Sudan.

Organizers began planning the photo-op protest in the days after the White House announced a second travel ban on residents of the above countries, and stuck with their plan despite a federal judge's nationwide restraining order against the new ban last week. 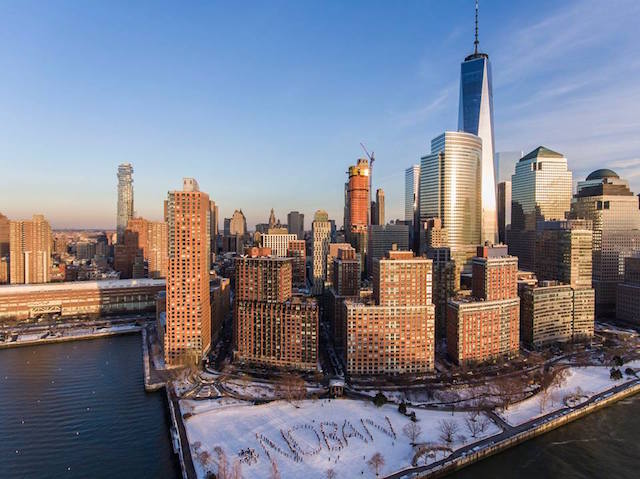 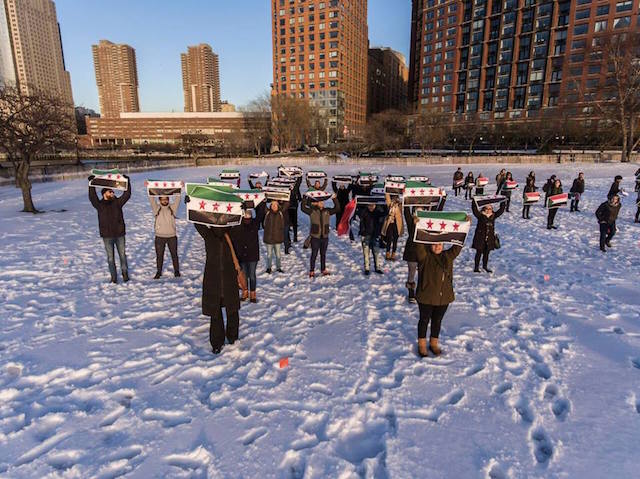 One of those organizers, Faiza N. Ali, told Gothamist the human banner idea was hatched during the Women's Strike earlier this month. "We were thinking of the work ahead and knew that Muslim Ban 2.0 was set to go into effect in less than 10 days," Ali said. "The response to Trump's first executive order was swift and powerful and the response to the second wouldn't be any different. People on the ground are ready to fight, resist and repeat as needed."

Minutes before the human banner was formed, Rama Issa, 29, of Brooklyn clung to a printed Syrian flag and said her father, who lives in Damascus and is unable to travel to the U.S., was a big part of why she was there. "This is to tell the president that regardless of what the courts say, we're still going to rise against any sort of xenophobic policy he puts forward," Issa said. "It's necessary to keep active."

"Solidarity is a verb and the #NoBan action really helped me understand what that actually means," Ali said. Watch the full drone-shot video below

##NoBan
#human banner
#immigration
#mulsim
#muslim ban
#travel ban
#original
Do you know the scoop? Comment below or Send us a Tip