The MTA's threat to prohibit "die-in" protests against police brutality at Grand Central Terminal proved empty last night, as demonstrators spread out on the floor of the main concourse three times over the course of as many hours while police stood motionless nearby.

Nearly a dozen protesters at a time arranged themselves on the floor over the course of the night, once for as long as seven minutes. MTA police and state troopers watched the proceedings from the periphery, making no move to use the plastic flex-cuffs looped to each of their waists.

On the station's loudspeaker, a new message droned on repeat: "Attention customers, for your safety, lying on the floor, platform, stairs or landing is prohibited," it said, at times lost under the din of mic checks and calls to action.

"Grand Central's a public place," said Timothy Ford, a member of Africans Helping Africans and the People's Power Assembly. "We can walk around Grand Central until we get tired. If people are sitting down on the floor in Grand Central, we can do that, too. It's our right to do that in a public place." 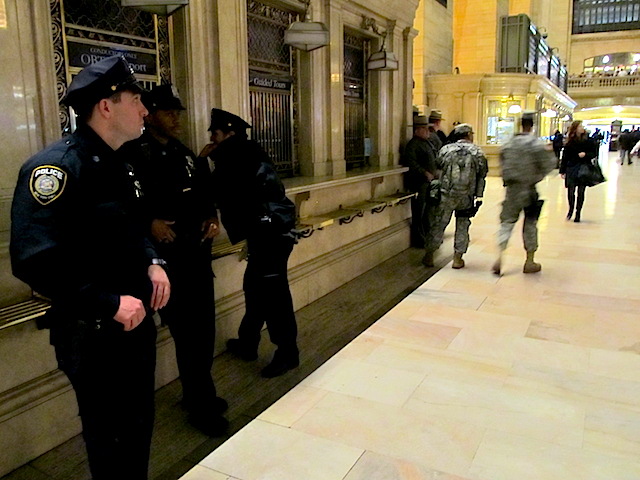 Asked whether police intended to make any arrests, one officer chuckled. "I hope so," he said. Still, the assembled muscle offered no indication that it intended to move. One man, who shouted that he was a veteran, made repeated passes by the group. "Before you leave, you gotta go through me," he screamed, visibly enraged. "You see that, cops? He's threatening us," one protester hollered toward the police.

Kimberly Ortiz said yesterday's larger protest was in solidarity with the group who has been occupying Grand Central since December. "We've been attacked verbally and physically, and when we look up, the cops do nothing," she said.

When it comes to what's legal, she said protesters have been receiving mixed messages from police. Initially, she said, they were told that while placards on the floor were banned, die-ins were permissible. "And that's when they decided 'Well, you can't do that either,'" she said. "So they suggested it, and then when we went to comply, they said we couldn't do that either."

It's odd the MTA sent so many officers w/flex-cuffs to the #GrandCentral demo but evidently gave orders not to arrest pic.twitter.com/7x25CkUkGv

#die-ins
#eric garner
#ferguson
#grand central terminal
#michael brown
#protests
#original
Do you know the scoop? Comment below or Send us a Tip