The action, blocking the intersection in front of Governor Cuomo's Manhattan office, was intended to pressure the Governor to strengthen existing rent-protection laws, which are currently up for renewal in Albany.

"Cuomo has said he wants to extend the rent laws as they are now," said Ava Farkas, executive director of the Metropolitan Council on Housing, who took part in the demonstration. "But the rent laws are broken, and it's making the city unlivable."

Current laws provide a perverse incentive for landlords to evict their tenants in order to charge above $2,500, at which point units are no longer subject to rent regulation, Farkas explained. "It's led to the loss of 300,000 affordable units in the last 20 years," she said. "That's just going to continue if the rent laws aren't strengthened." 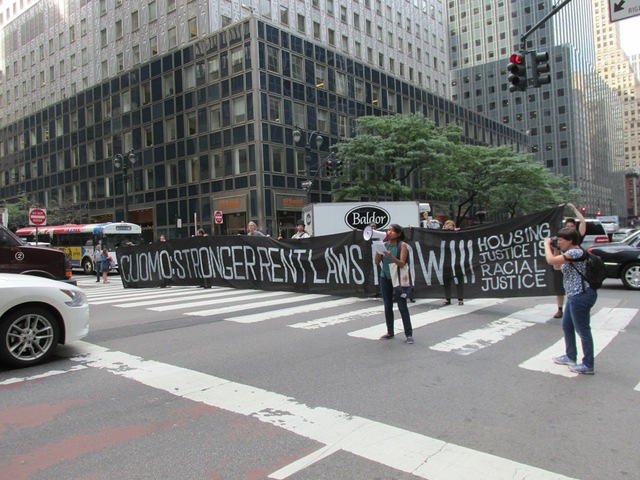 Not everyone was persuaded by the street shutdown. "I'm all for protesting," said one pedestrian passerby. "But blocking traffic when people are trying to get home to their families, that makes no sense." Motorists were more pointed in their reactions. "Get the fuck out of the road!" a man bellowed across the idling cars to the protesters. "Make your point some other fucking way," a woman yelled. "Don't break the laws."

Undeterred, the protesters stayed in the intersection for roughly ten minutes, until a particularly angry woman approached and began tearing the banner from their hands. The blockaders, chanting "We'll be back," beat a strategic retreat to the sidewalk in front of the Cuomo's office, where they remained for another half an hour, holding the banner, distributing flyers, and reciting chants like "Cuomo, Cuomo, you can't hide / We know you're on the landlords' side!"

"Where I live, it's a war zone," said Esteban Giron, of the Crown Heights Tenant Organization. If Albany doesn't improve rent protections, Giron said, "In four years my neighborhood is going to bleed more affordable housing than the Mayor could ever build in 50 years."

Sarah Quinter, a fourth-generation New Yorker who took part in the protest, said the group felt the need to step up the pressure on state leaders after less confrontational tactics have failed to move the powers that be in Albany. "This is an escalation, and there's going to be more of it," Quinter said. "I'm seeing the city that made me who I am being taken away."

Governor Cuomo's spokesperson did not immediately respond to request for comment.

#andrew cuomo
#protests
#rent
#rent regulation
#original
Do you know the scoop? Comment below or Send us a Tip