Protesters Are Waiting For Trump Outside The Intrepid Donald Trump is paying a brief visit to New York City tonight for the first time since his inauguration, for a reception and dinner onboard the Intrepid. Protestors are now gathering near the decommissioned aircraft carrier to greet him with signs and cheers lambasting his presidency, with a special focus on today's narrow vote in the House of Representatives to repeal Obamacare and replace it with the American Health Care Act.

Air Force One is expected to touch down at JFK airport at approximately 6:15 p.m., at which point the President will be flown by helicopter to a helipad by Pier 11 in the financial district, and then travel by motorcade to the Intrepid. 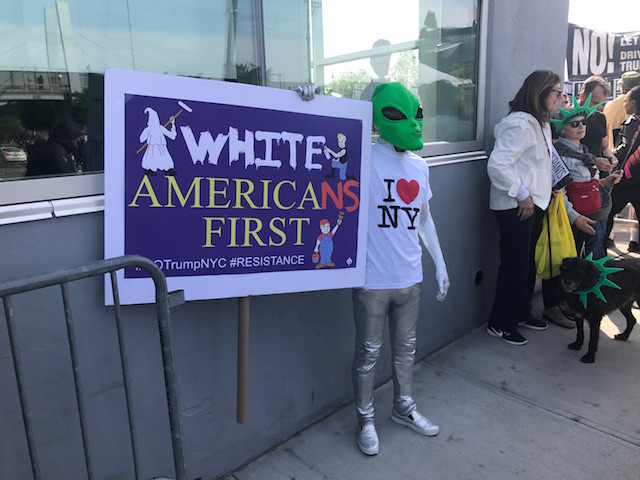 Shortly before 5 p.m., approximately several hundred protestors stretched from 44th to 45th Street at 12th Avenue, almost directly across from the Intrepid museum at 46th Street. (The Guardian reports about a thousand people are protesting total.) Reporter Jake Offenhartz tells us the area is "pretty packed," with "a lot of people talking about healthcare." Scott Levine, an artist's manager who lives in Astoria, told Gothamist the healthcare vote was one of the big issues that brought him out tonight.

"Millions of people are going to be thrown off healthcare. Millions of people are going to die. I consider what happened today tantamount to mass murder," Levine told us. He criticized the NY Representatives—Lee Zeldin, Peter T. King, John J. Faso, Elise Stefanik, Tom Reed, Claudia Tenney, and Chris Collins—who voted for the bill. "They're toast. Anyone who voted yes to this today is toast," he said. "Goodbye. Don't let the door hit you on the way out."

Offenhartz says the area is crawling with cops, Secret Service police, and FBI agents. Security seems to be letting people in tuxedoes through:

O/H: "Everyone going to this benefit looks exactly like you'd expect" pic.twitter.com/DwqdME1Fzs

Meanwhile, protestor Mel Stevens showed us his 12-foot tall Trump/Bannon puppet, which he contructed himself:

Mel says this is not the best puppet he's ever made, concedes "its a rather good puppet" pic.twitter.com/sUU6JDmaXv

"I built this about two months ago," Stevens, who lives in the Village, told us. "I built the 12-foot puppet first. That head, you see, I can take it off and put anyone's head on it I want. Whoever's in bad favor." He added, "The whole thing is Bannon pulling the strings."

We will update as the protest continues.

#affordable care act
#american healthcare act
#donald trump
#protest
#trump
#original
Do you know the scoop? Comment below or Send us a Tip