The city's bicycling infrastructure is expanding further this year to include a heavily-trafficked part of Manhattan, courtesy of a Department of Transportation plan to add a bike lane on 7th Avenue from West 30th Street to Clarkson Street.

Streetsblog reports that the proposal for the bike lane was presented to Manhattan's Community Board 4 Wednesday night. The proposed street redesign in that area would get rid of one motor vehicle lane out of four that currently exist, and establish a bike lane protected by concrete pedestrian islands and parking on the east side of the 7th Avenue. The lane will rely on "mixing zones" at intersections along that part of the avenue, a design in which cyclists and turning drivers get a green light simultaneously, and which may have contributed to the death of cyclist Kelly Hurley on First Avenue this month, along with possible driver negligence. 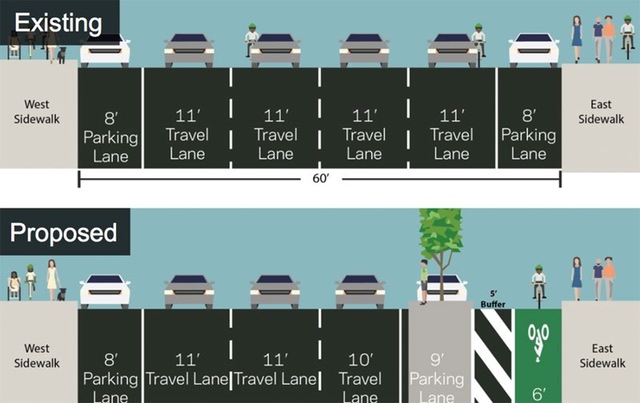 In a presentation shown to the community board, the DOT pointed to 7th Avenue as a high volume bike road, with the agency saying that they counted 1,700 bikes at West 30th Street, 2,350 bikes at West 20th Street and 1,300 bikes at Charles Street over a 14 hour period in July 2016.

Last night's presentation focused on the area between West 14th Street and West 30th Street, and a future presentation on the plan for the 7th Avenue South piece of the bike lane in the West Village is planned for May.

#bike lane
#bike wars
#department of transportation
#vision zero
Do you know the scoop? Comment below or Send us a Tip