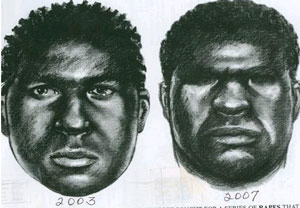 Police say a man suspected of a recent Brooklyn rape is connected to three other rapes in the past four years. Two weeks ago, a couple was in a parked car in Prospect Park when a man looked in their car with a flashlight. The boyfriend (an off-duty cop) got out to confront the attacker, a scuffle ensued and somehow, the couple got separated. The attacker caught up with the woman and raped her. Now, police say DNA evidence has linked the attacker to three other rapes.

The other incidents are similar: Women are approached in parks and are raped after being separated from a companion. In June 2003, a woman was attacked in Baisley Pond Park in Queens, and two months later in August, another woman was attacked in Roy Wiklins Park, also in Queens. On June 11 of this year, two men raped a woman in Roy Wilkins Park; four days later, the woman in Prospect Park was raped.

Police are looking for information and released sketches of the suspect in 2003 and 2007; call Crime Stoppers 800-577-TIPS.