A meeting about crime in Prospect Lefferts Gardens became a referendum on Broken Windows policing when a dozen or so of the 60 residents in attendance sounded off to NYPD reps about what they say are racist and overly-aggressive policing tactics in the area. Several spoke out against the recently announced plan to hire another 1,300 cops in the next year, which coincides with Summer All Out, a program to flood high-violence areas—including the 67th Precinct, which encompasses East Flatbush and part of Lefferts—with cops who would normally be on desk duty.

Early on, one black woman in attendance said she opposed any calls for more police that might come out of the meeting, so long as low-level enforcement is disproportionately aimed at young men of color.

"I have three nephews that are grown," said Vena Moore, a 13-year neighborhood resident and Brooklyn native, to the officers who attended the meeting from the 70th, 71st, and 67th precincts. "They get harassed by cops periodically, and if we're going to have more of that kind of policing with additional cops, then I don't want more cops."

Responding to that concern, raised by her and others in the audience, Det. Robert Thybulle of the 67th Precinct said that some 500-700 officers are headed for retirement in the next year, so the hiring spree is really not a huge gain. Plus, he said, "personally, I think more police can only be good."

Circling back around to the issue after being pressed further, Thybulle, who is African-American, cited the sensitivity training he received at the Police Academy.

"I had to do a report on Germany and German society. I had to look at everything related to the food, to the culture, to everything. Everyone goes through that in the Police Academy."

When I caught up to him in the lobby for more information, Det. Thybulle explained that he attended the academy in 1999, and that the project took 2-3 weeks of his 6-month training as a cadet. Thybulle noted that the department added a new, three-day sensitivity training for all officers last winter, a change that came in the wake of a grand jury's decision not to indict Officer Daniel Pantaleo in the death of Eric Garner.

Back in the sweltering basement, meeting attendees shared alarming stories of police misconduct (none could immediately be independently verified). A white woman described being ticketed for being in Prospect Park after dark with her Puerto Rican boyfriend by a cop who asked, "What's a nice girl like you doing in this neighborhood?" then implied that he was making errors on her ticket so that she could get off, but stuck it to her boyfriend.

A longtime resident, Aaliyah Lessey, told of sitting down on a park bench off of Ocean Avenue around 5 p.m. one day, then being ticketed along with everyone else in the park for an unspecified violation. Having known many of the neighborhood officers, she was flabbergasted when one she'd never met asked for her ID and came back with a summons.

"If I was smoking or drinking, it was fine, but I wasn't doing nothing," she said.

She said a judge dismissed the summons after taking one look at it. Others bemoaned the shutting-down of a longstanding block party, a move the 70th Precinct's Lt. Jacqueline Bourne said was due to a brawl. Equality for Flatbush activist Imani Henry described an hour of monitoring a checkpoint at Flatbush and Church avenues in 2014, during which police stopped only one white driver, and only after cops spotted him talking to cop watchers. Audience members began to raise their voices as the police on hand avoided their questions, saying they couldn't comment on incidents without knowing the particulars, and encouraging the aggrieved to call Internal Affairs and the Civilian Complaint Review Board.

"A lot of what they're suggesting, people have tried already," said an East Flatbush resident who asked to be identified just as Adam, as he left in the middle of the meeting.

He noted that the city had already paid hundreds of thousands to settle civil rights complaints against Det. Phil Atkins by 2012, when he shot and killed an unarmed black woman named Shantel Davis in East Flatbush as she drove a stolen car.

"That's why people are saying we need to tear this whole racist system down," he said.

Henry interjected in the discussion often, declaring it "ageist," when police and other attendees mentioned "kids," calling "gang" a term meant to "criminalize young men of color"—it didn't help that Officer Vincent Martinos from the 71st Precinct kept repeating that the recent shootings were by and large "gang-related or youth-related"—and, when given the floor, consistently referring to crime as "quote-unquote crime." Most in the room seemed to agree that area kids need more summer programs and jobs, and to be able to go to parks without having police pull guns on them, as some said happened following a recent fistfight. 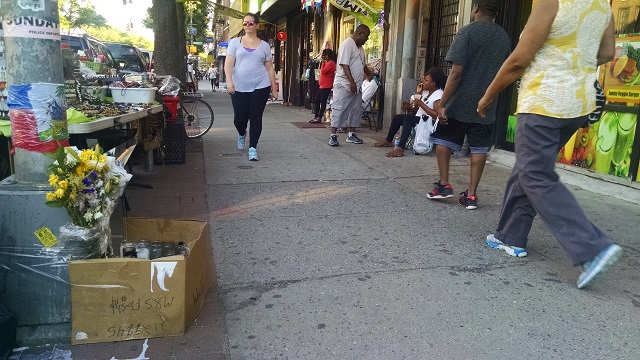 A sidewalk memorial marks the block of Flatbush Avenue where Jeffrey Middleton died in a gun battle the weekend before last. (Nathan Tempey/Gothamist)

But some on hand were interested in what the police had to say about a spike this year in shootings, including two the weekend before last that injured five and killed one within two blocks of each other on Flatbush Avenue. In other words, actual crime. Longtime resident Cheryl Sealey, who is African-American, said that there is a time to debate police shows of force, but it's not just yet.

"One of our biggest concerns is safety," she said. "At the same time, we understand what racial profiling is, and there are valid concerns about that. But we want a strong police presence. We can debate all we want once we've made the streets safe."

Lt. Bourne said the early-morning June 13th shootout on Flatbush Avenue between Parkside and Clarkson avenues that killed 33-year-old Jeffrey Middleton and injured a 26-year-old was not "gang-related," but rather involved "older" people, and was in essence "a dispute between two individuals and it just so happened they had weapons."

As for the shooting two mornings later outside the nearby D Avenue Sports Bar that injured four, Officer Martinos said it began as a fight between two men in the bar and spilled outside, and that officers have identified a suspect and are closing in on him. The April shooting at a Flatbush Avenue funeral home that killed two and injured four is still under investigation, according to Bourne.

Henry, though, is more concerned about accountability in the police actions in Flatbush and East Flatbush that ended the lives of Shantel Davis as well as Kimani Gray, and Kyam Livingston, who died in 2013 after Central Booking cellmates say jailers denied her medical treatment.

"Gray, Livingston, Davis—that's a lot of police murders for one neighborhood," he said.