Brooklyn prosecutors announced the indictment of 34 people on drug dealing-related charges on Wednesday, for allegedly taking part in a heroin, synthetic opiate, and cocaine-selling operation. The supply chain included Chinese chemists, a distributor in Arizona, small-time dealers from South Carolina and the hills of central New York, and a crew of dealers across Brooklyn and Queens, according to prosecutors. And as if actual heroin or its synthetic cousin fentanyl were not risky enough, some of what the dealers in the boroughs thought was heroin was actually furanyl fentanyl, a chemical analogue of fentanyl cooked up by back-room chemists to evade the authorities.

The investigation began in November 2015, and police said on Wednesday that they traced the drugs from China to New York. In making the arrests, cops netted 10 kilos of narcotics, 17 guns, and $300,000 in cash.

Brooklyn district attorneys accuse a man named Nigel Maloney, 49, of Phoenix, Arizona of being the primary supplier of the drugs being moved in the streets of eastern Brooklyn and southern Queens from June 2016 to this month. Maloney allegedly coordinated with a lieutenant in Jamaica, Queens. He in turn allegedly supplied two wholesalers, who worked with at least 10 lower-level dealers. Many of those involved were allegedly affiliated with the Bloods. Meanwhile, Joseph Raffone of Ridgewood, Queens, and Kristian Cruz of the East Village allegedly received kilos of narcotics through the mail, and sold large quantities to at least two other wholesalers. It's not clear who supplied the mailed drugs, but at least some of it was delivered via DHL, according to prosecutors. Cruz allegedly had a surrogate pick up one delivery of what he thought was heroin, and sent another to his mom's place.

The investigation apparently relied on an array of wiretaps and some visual surveillance. The probe purportedly revealed, among other things, that the Lindenwood Diner and a nearby Rite Aid parking lot in East New York are favored spots for drug transactions.

Both Cruz and Raffone allegedly sold furanyl fentanyl thinking it was heroin. Police say when they arrested Raffone in November on an earlier set of charges, they found him in an apartment with two loaded guns, 494 grams of heroin, and 2,292 grams of furanyl fentanyl, which prosecutors say is sometimes called White China. In early November, shortly before Raffone's arrest, he and Cruz both allegedly made calls to an unidentified person to discuss the quality of the heroin they were getting in bulk.

Fentanyl is a synthetic opioid created in 1960. It was originally intended to be used as an intravenous anesthetic in combination with other drugs. It is now also legally used to treat severe pain, usually coming in a patch. As they have done with synthetic marijuana and so-called bath salts, black market chemists, many of them in China, have concocted close chemical variations of fentanyl to try to stay one step ahead of legal classifications. The federal government only classified furanyl fentanyl as a controlled substance in November, and there is still not a state law addressing it. To navigate this, in some instances Brooklyn DAs charged alleged drug dealers in the recent bust with attempted sale of a controlled substance—in other words, they thought they were selling heroin, which is itself a crime.

Maloney has yet to be apprehended, according to a law enforcement official. The indictment includes 357 counts, most of them felonies. The top charge carries as many as 20 years in prison. Cruz was arraigned last Thursday and released on $250,000 bail, court records show. Raffone has been incarcerated since his initial arrest last year, according to jail records. He pleaded guilty to drug and gun possession charges on March 1st, but now faces 18 more felony counts.

Lawyers for Cruz and Raffone did not immediately return calls seeking comment.

Black market drug vendors have come to favor fentanyl as well as its variants because it is around 40 to 50 times more potent than heroin, meaning more product can be moved with less effort. The flip side of this is that dosage is much more fickle, which has led to a spike in overdoses involving fentanyl (the musician Prince is among the victims). 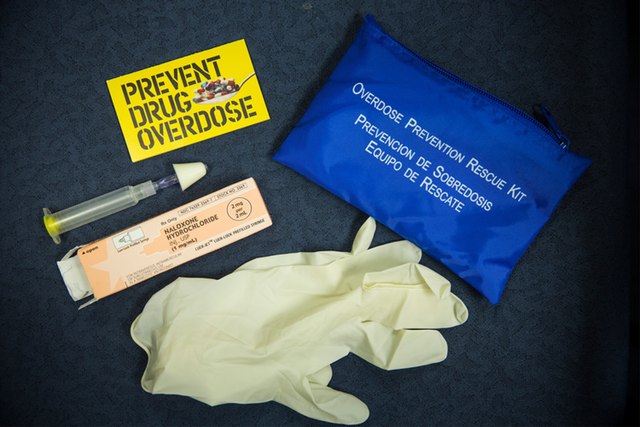 The Naloxone anti-overdose kits that are supposed to soon be carried by every NYPD patrol officer. (Andrew Burton/Getty)

Also on Wednesday, President Trump announced a plan to create a commission to look into this whole opioid thing, led by disgraced New Jersey Governor Chris Christie. On the campaign trail, Trump vowed to "give people struggling with addiction access to the help they need." As president, he has appointed lock-'em-up advocate and anti-marijuana hardliner Jeff Sessions as attorney general, and proposed cutting funding for public health research in favor of building the border wall that Mexico won't pay for.

"These people don’t need another damn commission," an anonymous former Obama administration official who worked on the opioid crisis told Politico. "We know what we need to do. It's not rocket science."

At a roundtable on addiction with recovering addicts, Sessions, and Drug Enforcement Administration head Chuck Rosenberg on Wednesday, Rosenberg said "education, prevention, and treatment" are "crucial." Rosenberg is an Obama appointee who Trump has kept on. Summing up towards the end of the roundtable, Trump said, "Big issue. Very, very big issue."